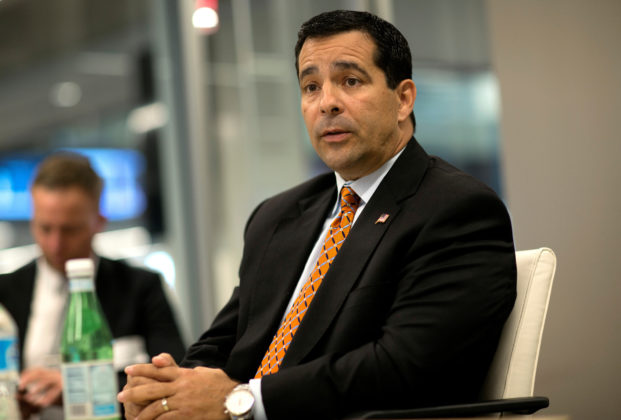 WASHINGTON (Reuters) – The U.S. counter-intelligence chief said on Tuesday he was worried about threats from China and Russia to disrupt the coronavirus vaccine supply chain in the United States.

“Our adversaries are trying to disrupt that supply chain,” he said. Asked which adversaries he was particularly concerned about, he replied, “I would say China and Russia right now.”

The Chinese and Russian embassies did not immediately respond to requests for comment on Evanina’s assertion. Russia and China have denied U.S. accusations that hackers linked to both governments tried to steal data from vaccine manufacturers.

U.S. states are scrambling to accelerate inoculations as infections and deaths surge – COVID-19 has claimed on average about 3,200 lives nationwide every day over the past week.

Since the pandemic began more than 10 months ago nearly 375,000 people in the country have died, according to a Reuters count.

Evanina said that his agency was working with the U.S. Army and the Department of Health and Human Services to ensure the safe “transportation” of the vaccines “from the manufacturing site to the end-user inoculation.”

Vaccines available are made by Pfizer and BioNTech and Moderna. Nearly 9 million Americans have received the first of two doses, according to the U.S. Centers for Disease Control and Prevention, less than one-third of the 25 million doses distributed by the federal government.

Public health experts have said no U.S. state has so far come close to using up its federal vaccine allotments, a much slower-than-expected roll-out blamed in part on rigid rules sharply limiting who can be inoculated.