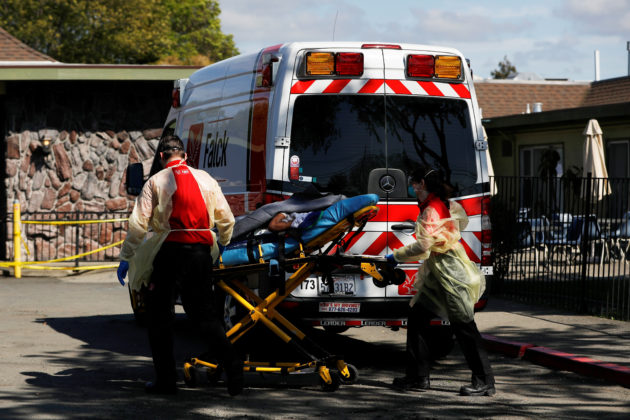 FILE PHOTO: An ambulance crew transports a patient to Gateway Care and Rehabilitation Center, where 7 deaths and 65 confirmed cases of coronavirus disease (COVID-19) among its staff and patients were reported, in Hayward, California, U.S. April 10, 2020. REUTERS/Stephen Lam

(Reuters) – Coronavirus deaths in the United States topped 190,000 on Wednesday along with a spike in new cases in the U.S. Midwest with states like Iowa and South Dakota emerging as the new hotspots in the past few weeks.

Iowa currently has one of the highest rates of infection in the nation, with 15% of tests last week coming back positive. Nearby South Dakota has a positive test rate of 19% and North Dakota is at 18%, according to a Reuters analysis.

Kansas, Idaho and Missouri are also among the top 10 states for positive test rates.

New coronavirus infections have fallen for seven weeks in a row for the United States with a death rate of about 6,100 per week from COVID-19 in the last month.

The University of Washington’s health institute last week forecasted that the U.S. deaths from the coronavirus will reach 410,000 by the end of the year.

(Reporting by Anurag Maan in Bengaluru; Editing by Lisa Shumaker)