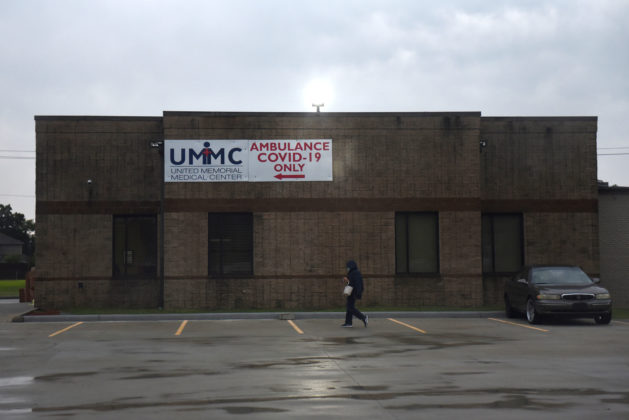 FILE PHOTO: A person walks next to a coronavirus disease (COVID-19) testing site, which was closed due to inclement weather, in Houston, Texas, U.S., June 22, 2020. REUTERS/Callaghan O'Hare

(Reuters) – The Trump administration said it was “transitioning” 13 coronavirus testing sites in five states, not cutting them, following an NBC report on Wednesday that funding and support for those sites would end June 30.

NBC said the sites are in Illinois, New Jersey, Colorado and Pennsylvania as well as Texas, which is among several U.S. states where cases of the novel coronavirus have surged.

U.S. Assistant Secretary for Health Admiral Brett Giroir called the report misleading. “We are transitioning 13 sites from the original now antiquated program to the more efficient and effective testing sites,” he said in a statement.

Giroir added that he had spoken to leaders of the five states, noting they had agreed “it was the appropriate time to transition” to other options. He said testing sites that will continue to get federal payments include those at pharmacies and federally qualified health centers.

“If we lose those sites, they’ll just put more pressure on some of the other clinics,” she told MSNBC in an interview, adding that she has asked federal authorities to delay the move until August.

President Donald Trump has lamented the rising U.S. coronavirus cases and sought to put the onus on increased testing, which he said makes the United States look bad. He told a weekend political rally that he asked for testing to be slowed down, something White House and top U.S. health officials have said was not requested.

Besides more testing, health experts have said the rise in U.S. cases is due to a higher proportion of positive test results and more community spread in some states.

The Trump administration tried to move testing site responsibility to states in April, but backed off the effort under pressure from lawmakers, NBC reported.

The National Governors Association had no comment on the report. Representatives for the governors of the five affected states could not be immediately reached.