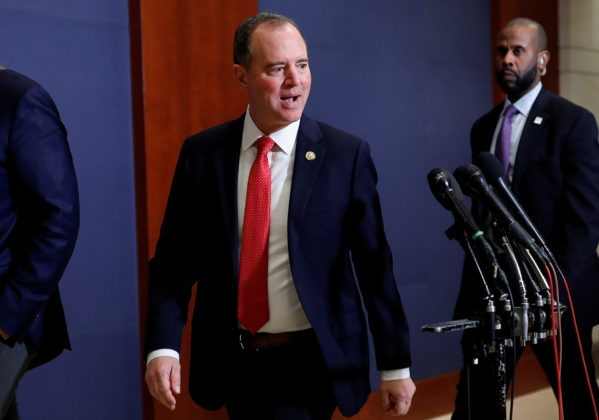 FILE PHOTO: House Intelligence Committee Chairman Adam Schiff (D-CA) arrives for a national security briefing before members of the House of Representatives about how Russia has been using social media to stoke racial and social differences ahead of this year's general election, on Capitol Hill in Washington, U.S., March 10, 2020. REUTERS/Carlos Barria

WASHINGTON (Reuters) – U.S. House Democrats said on Wednesday U.S. intelligence agencies have failed to adapt to the growing threat posed by China and warned that the United States would not be able to compete with Beijing in the future without significant changes.

A report released by Democrats on the House Intelligence Committee – chaired by Democratic Representative Adam Schiff – called for a full review of intelligence gathering, saying that spy agencies as a whole had come to treat traditional intelligence missions as secondary to counter-terrorism.

The report said the unfolding of the coronavirus pandemic after it began in China showed the need to better understand Chinese decision-making, including at the provincial level, and that the intelligence community had paid insufficient attention to “soft” security threats, such as infectious diseases.

“The stakes are high,” a redacted version of the report released to journalists said. “If the IC (intelligence community) does not accurately characterize and contextualize Beijing’s intent, America’s leaders will fail to understand the factors that motivate Chinese decision-making.

“Absent a significant realignment of resources, the U.S. government and intelligence community will fail to achieve the outcomes required to enable continued U.S. competition with China on the global stage for decades to come, and to protect the U.S. health and security,” the report said.

Its release comes in the run-up to the Nov. 3 presidential election, in which how the United States should handle its relationship with China – the world’s second largest economy and a growing strategic rival – has been the most important foreign policy issue for Republican President Donald Trump and his Democratic challenger, former Vice President Joe Biden.

The Democratic report said the government should strengthen its ability to “disrupt and deter” Chinese influence operations on U.S. soil and called for a bipartisan congressional study to evaluate the intelligence services with the express goal of reforming legislation governing their activities.

It further called for a broadening of programs to mentor the next generation of China analysts and said agencies should consider “reskilling” programs for those working in counterterrorism.

A separate report on Wednesday from the House Republicans’ China Task Force said it contained more than 400 “forward-leaning recommendations” in response to China, including an enhancement of counter-intelligence capabilities and a bolstering of Mandarin-language capacity.