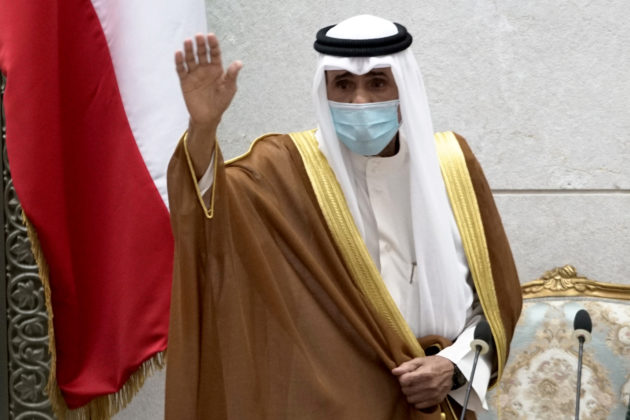 KUWAIT (Reuters) – Kuwait on Wednesday laid to rest late ruler Sheikh Sabah al-Ahmad al-Sabah, a Gulf Arab elder statesman who helped steer his nation through some of the region’s most turbulent decades, in funeral rites closed to the public due to COVID-19 concerns.

The only leader of fellow Gulf Arab states in attendance was the emir of Qatar, which has been boycotted by Saudi Arabia and its allies, including the United Arab Emirates, in a dispute that Sheikh Sabah, 91, tried until his death to resolve.

His successor and brother, Emir Sheikh Nawaf al-Ahmad al-Sabah, 83, headed the rites after being sworn in at parliament, pledging to work for the OPEC member state’s prosperity, stability and security.

“Our dear nation today faces difficult situations and dangerous challenges that can only be overcome … by unifying ranks and working hard together,” he told the National Assembly.

Sheikh Nawaf takes the reins of the small wealthy nation, which holds the world’s seventh-largest oil reserves, at a time when low crude prices and the coronavirus have strained the finances of a country with a cradle-to-grave welfare system.

His succession is not expected to change oil or investment policy and he is seen maintaining a foreign policy that saw Kuwait balance ties with larger neighbors Saudi Arabia, Iraq and Iran.

Dignitaries from around the world paid respects to Sheikh Sabah, a seasoned diplomat and savvy politician widely respected as a humanitarian who strove to heal rifts in the Middle East, mending ties with former occupier Iraq and championing the Palestinian cause.

“He will be long remembered by all who work for regional stability, understanding between nations and between faiths, and for the humanitarian cause,” Britain’s Queen Elizabeth said in a statement tweeted by Buckingham Palace.

Sheikh Sabah, who died on Tuesday in the United States were he was hospitalized since July, had ruled the U.S.-allied country since 2006, and steered its foreign policy for over 50 years.

Sheikh Nawaf was at the airport when the plane brought the body back home, wrapped in a white shroud and the Kuwaiti flag.

The UAE said it was represented by its deputy premier, who is also interior minister, and the minister of tolerance and coexistence, both members of Abu Dhabi’s ruling family.

When Kuwait’s previous emir, Sheikh Jaber al-Ahmad al-Sabah, died in 2006, thousands of Kuwaitis attended the funeral and many, along with expatriates, lined the streets.

“I wish we could have young leadership and new visions … I want to see change in our economy, education, and implementation of many promises that didn’t take place,” she said, adding that other Gulf states saw change under a new generation of leaders.

Sheikh Nawaf, who lacks the diplomatic skills of his predecessor, is likely to focus on domestic matters such as naming a crown prince who would manage ties with a parliament that has often clashed with the government and hindered economic reform efforts, diplomats and analysts say.

Under the constitution, the emir chooses the crown prince but traditionally the ruling family, some of whose senior members have been jostling for the position, convenes a meeting to build consensus. Parliament also has to approve the choice.

“I don’t expect big change under Sheikh Nawaf. We have big problems and some may be resolved but I’m not very optimistic,” said Mohammed Abu Ghanem, a 45-year-old Kuwaiti.