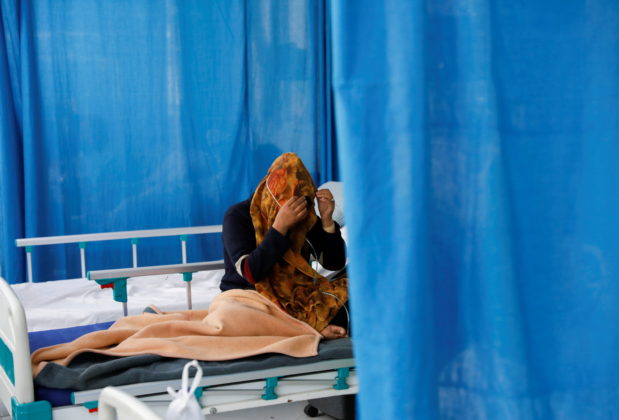 FILE PHOTO: A patient suffering from COVID-19 receives treatment at the Afghan-Japan Hospital, amid the spread of the coronavirus disease (COVID-19), in Kabul, Afghanistan June 15, 2021. REUTERS/Stringer

(Reuters) – A U.S. donation of more than 1.4 million doses of the Johnson & Johnson COVID-19 vaccine arrived in Afghanistan on Friday, the first of two shipments this month, the U.N. children’s agency UNICEF said in a statement.

A second shipment of vaccines donated by the United States through the COVAX global sharing program will bring the total to 3.3 million doses, UNICEF said. The U.S. vaccine donations come as U.S. military forces withdraw from Afghanistan, ending a 20-year war in the country.

The deliveries are part of President Joe Biden’s pledge to share 80 million vaccine doses globally, most through COVAX, which is run by the Gavi Vaccine Alliance, the Coalition for Epidemic Preparedness Innovations, the World Health Organization and UNICEF.

“These vaccines arrive at a critical time for Afghanistan as the country faces a difficult surge in COVID-19 infections,” said UNICEF Representative in Afghanistan, Hervé Ludovic De Lys.

Over 1,200 new infections were reported in Afghanistan on July 8th down from a record peak of 1,853 new cases on June 21st, according to the Reuters COVID-19 tracker. Less than four percent of the Afghan population is vaccinated, UNICEF said.

“As many countries face vaccine supply challenges, the dose-sharing mechanism is a rapid way to close the immediate supply gap,” De Lys said. “I hope that other governments will step up and share their doses, supplies and therapeutics to protect those most in need.”