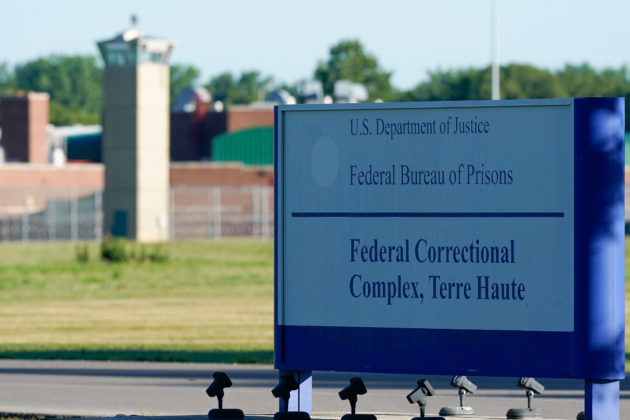 A sign stands outside the Federal Correctional Institution, Terre Haute, as Daniel Lewis Lee, convicted in the killing of three members of an Arkansas family in 1996, is set to be put to death in the first federal execution in 17 years, in Terre Haute, Indiana, U.S. July 13, 2020. REUTERS/Bryan Woolston

(Reuters) – The U.S. government on Tuesday carried out its first execution in 17 years, putting to death convicted murderer Daniel Lee after the Supreme Court cleared the way with a ruling issued at two o’clock in the morning.

The execution had been held up by a U.S. District Court in Washington, which on Monday ordered the U.S. Justice Department to delay four executions scheduled for July and August. The order was later affirmed by an appellate court.

But at 2:10 a.m. (0610 GMT), about 10 hours after Lee’s execution was due to take place in Terre Haute, Indiana, the Supreme Court in a 5-4 vote cleared the way for federal executions to resume.

“The plaintiffs in this case have not made the showing required to justify last-minute intervention by a Federal Court. Last-minute stays like that issued this morning should be the extreme exception, not the norm,” the Supreme Court said.

Lee was convicted of killing three members of an Arkansas family in 1996, but some relatives of his victims opposed him receiving the death sentence.

Strapped to a gurney, Lee was asked if had any last words, according to a media witness present in the viewing chamber.

“I didn’t do it. I’ve made a lot of mistakes in my life but I’m not a murderer,” Lee said, according to a reporter who witnessed the execution and issued a report for all media. “You’re killing an innocent man.”

As the drug was being administered, Lee raised his head to look around, and his breathing appeared to become labored, according to the pool report. Soon after, Lee’s chest was no longer moving, his lips turned blue and his fingers became ashy.

Two unnamed Bureau of Prisons officials and Lee’s spiritual adviser could be seen inside the execution chamber.

While several states conduct executions, the federal government had not done so since 2003.

Attorney General William Barr announced last July that the Justice Department would resume carrying out executions of some of the 62 inmates on federal death row.