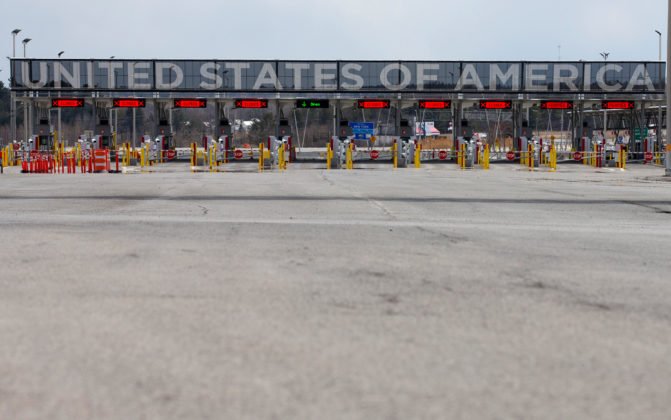 NEW YORK/MEXICO CITY (Reuters) – The Trump administration said on Tuesday it would extend existing restrictions on non-essential travel at land ports of entry with Canada and Mexico due to continued risks from the novel coronavirus pandemic.

“This extension protects Americans while keeping essential trade and travel flowing as we reopen the American economy,” U.S. Department of Homeland Security (DHS) Acting Secretary Chad Wolf said in a statement, without specifying an end date to the extension.

The travel restrictions had already been extended several times and were set to expire on June 23, according to a related U.S. government notice. A DHS official said the latest extension would run for 30 days.

Mexico’s foreign ministry said in a tweet on Tuesday that the travel restrictions across the country’s border with the United States would continue for 30 days.

The United States said it was in “close contact” with both countries on its northern and southern borders about the restrictions, which were first imposed in mid-March. The Trump administration had already extended indefinitely a separate set of pandemic-related rules that permit rapid deportation of migrants caught at U.S. borders.

Separately, the U.S. Department of Justice on Tuesday said in a statement it was again postponing hearings for thousands of migrants who have been waiting in Mexico for U.S. immigration court hearings.

The Justice Department, which runs the immigration court system, said the hearings for those in the so-called Migrant Protection Protocols program would be on hold until July 20.

“This will alleviate the need for travel within Mexico to a U.S. port of entry while pandemic conditions in Mexico remain severe,” the Justice Department said. The controversial program has stranded migrants – many of them seeking asylum in the United States – in Mexico for months.

Hundreds have been living in squalid tent camps near the U.S.-Mexico border, which health experts and immigration advocates have said leaves them vulnerable to coronavirus infections.