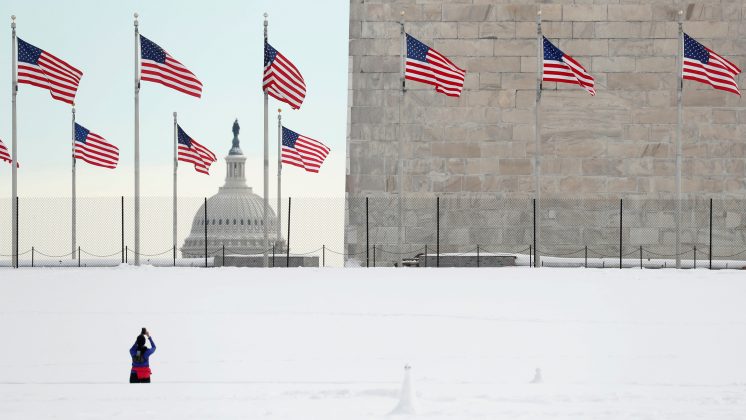 FILE PHOTO: Following a weekend snowstorm, the dome of the U.S. Capitol is seen in the distance as a jogger stops to photograph the Washington Monument in Washington U.S., January 14, 2019. REUTERS/Kevin Lamarque

WASHINGTON (Reuters) – U.S. President Donald Trump on Wednesday is expected to sign legislation providing 800,000 federal employees with back pay when the partial government shutdown ends, even through a conclusion to the impasse remains no where in sight.

As the shutdown stretches into its 26th day, Trump is also scheduled to meet with a bipartisan group of lawmakers at 11:30 a.m..

Whether the meeting is related to the shutdown was not immediately clear, however. Neither the White House nor lawmakers’ offices immediately responded to a request for details.

The shutdown began on Dec. 22, after Trump insisted he would not sign legislation funding a quarter of government agencies unless it included more than $5 billion for a wall along the U.S. border with Mexico.

The wall was a signature campaign promise of his before the 2016 presidential election. Trump said at the time Mexico would pay for it but has since reversed himself, denying that he ever said Mexico would directly foot the bill for the wall.

On Wednesday, Trump continued to blame Democrats for the standoff and trumpet his support of the wall, writing in a post on Twitter that wall projects around the world “have all been recognized as close to 100% successful. Stop the crime at our Southern Border!”

It was not immediately clear what wall projects he was referring to.

His tweets appear unlikely to move Democrats, who have controlled the House of Representatives since Jan. 3. Trump also needs the support of at least some Democrats in the Senate to pass funding legislation.

Senate Democrats have planned an event on the steps of the Capitol intended to highlight the havoc of the shutdown is wreaking, as 800,000 federal workers are furloughed – meaning they are forced to stay home, or work without pay – and contractors do not receive payments.

Economists have estimated that each week the shutdown continues will shave off 0.1 percent of economic growth.

More than half of Americans blame Trump for the government shutdown, according to a Reuters/Ipsos poll. A separate poll found the shutdown has affected four in 10 Americans, far beyond the 800,000 federal employees directly feeling the impact of the funding lapses.