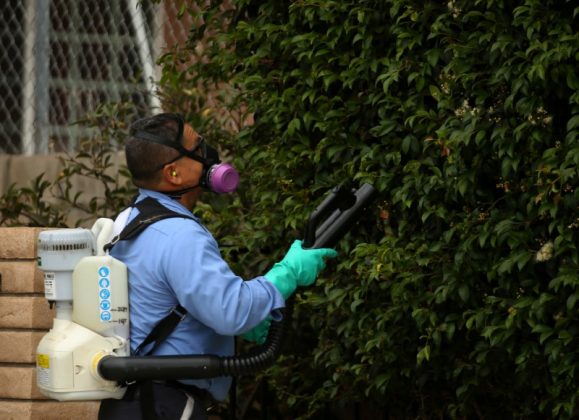 A county vector control member hand-sprays a neighborhood for adult Aedes mosquitoes after a travel-related case of Zika was confirmed in this area of San Diego, California, U.S. September 12, 2016. REUTERS/Mike Blake

WASHINGTON (Reuters) – U.S. health officials outlined on Tuesday how they planned to divide up $1.1 billion in funds approved by Congress to fight the Zika virus, including repaying $44.25 million they were forced to borrow from a fund allocated for other emergencies.

The funds were borrowed from the Public Health Emergency Preparedness cooperative, which helps state and local public health departments develop response plans to emergencies, while Congress battled over whether to supply the funds.

On a conference call with reporters, health officials said$394 million would go to the U.S. Centers for Disease Control and Prevention, $152 million to the National Institutes of Health and $387 million for the Public Health and Social Services Emergency Fund, which supports the nation’s ability to respond to public health emergencies.

A further $40 million is aimed at expanding primary healthcare services in Puerto Rico and other U.S. territories, and $20 million for projects of national and regional significance in those areas.

Puerto Rico has been particularly hard hit by Zika, a mosquito-borne virus that has been linked with a rare birth defect known as microcephaly. The virus has spread to almost 60 countries and territories since the current outbreak was identified last year in Brazil.

The government will be allocating funds, based on a competitive process, to support Zika virus surveillance and other programs. The funds will also be used to expand mosquito control, continue vaccine development and begin studies on the effect of Zika on babies born to infected mothers.

(Reporting by Toni Clarke in Washington; Editing by Peter Cooney)