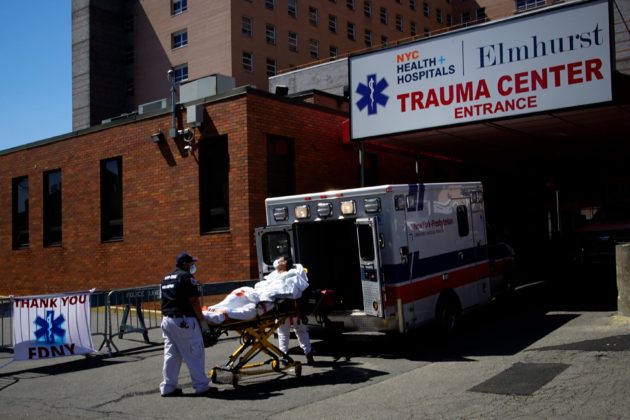 FILE PHOTO: Paramedics wheel a patient from an ambulance to an emergency arrival area at Elmhurst Hospital during the outbreak of the coronavirus disease (COVID-19) in the Queens borough of New York City, New York, U.S., April 6, 2020. REUTERS/Eduardo Munoz

By Doina Chiacu and Susan Heavey

WASHINGTON (Reuters) – Two senior U.S. health officials have said they now believe the coronavirus outbreak may kill fewer Americans than some recent projections, pointing to tentative signs that the death toll was starting to level off in New York and other hot spots.

U.S. Surgeon General Jerome Adams on Tuesday said he concurred with the director of the Centers for Disease Control and Prevention that some research models have projected death totals that may prove too high, though neither would offer an alternate estimate.

The White House coronavirus task force projected a death toll of 100,000 to 240,000 a week ago, saying containing deaths to that range was possible if strict social distances measures were respected, implying it could go even higher.

Adams on Tuesday told ABC’s “Good Morning America” that he was encouraged by recent data showing a possible “flattening” of the outbreak in some areas, referring to the shape of the curve when deaths are shown on a graph.

Asked if he believed the death toll would come in below the dire White House task force projection, Adams said, “That’s absolutely my expectation.”

“I feel a lot more optimistic, again, because I’m seeing mitigation work,” he said, adding that he agreed with CDC director Robert Redfield that deaths could fall short of totals that some computer models showed.

The governors of New York, New Jersey and Louisiana pointed to tentative signs on Monday that the coronavirus outbreak may be starting to plateau but warned against complacency.

The coronavirus death toll has surpassed 10,000 in the United States and confirmed cases have topped 367,000.

President Donald Trump, who previously said the coronavirus would miraculously disappear, responded to the recent White House projection by saying any death toll less than 100,000 would be considered a success.

Redfield on Monday told KVOI radio in Tucson, Arizona, that social distancing of the type ordered by nearly all state governors was effective.

“If we just social distance, we will see this virus and this outbreak basically decline, decline, decline. And I think that’s what you’re seeing,” Redfield said. “I think you’re going to see the numbers are, in fact, going to be much less than what would have been predicted by the models.”

A research model from the University of Washington – one of several cited by leading health authorities – forecasts 81,766 U.S. coronavirus fatalities by Aug. 4, down about 12,000 from a weekend projection.

The pandemic has upended daily life around the globe, killing more than 74,000 people and infecting at least 1.3 million.

American hospitals have been overwhelmed with sufferers of COVID-19, the respiratory illness caused by the novel coronavirus, reporting shortages of personnel, protective garments and other supplies while patients agonize alone, prohibited from receiving guests.

Even so, rates of growth and hospitalizations were slowing, possibly signaling a peak was at hand in three U.S. epicenters of the pandemic, the governors of New York and New Jersey said on Monday.

New York Governor Andrew Cuomo said statewide deaths from COVID-19 had leveled off around 600 per day in recent days, highest in the nation. But hospitalizations, admissions to intensive care units and the number of patients put on ventilator machines to keep them breathing had all declined, Cuomo said.

In neighboring New Jersey, the state with the second-highest number of cases and deaths, Governor Phil Murphy said efforts to reduce the spread “are starting to pay off.” Louisiana Governor John Bel Edwards likewise expressed cautious optimism, noting that new hospital admissions were trending down.