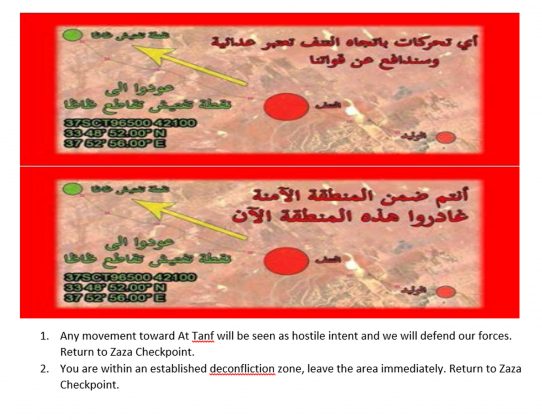 A copy of leaflets, with English-language translation, that were dropped by the U.S. military in southern Syria in recent days to advise Iran-backed forces to depart an area near a garrison used by U.S. and U.S.-backed forces as tensions mount are shown in this handout provided June 1, 2017. Courtesy U.S. Defense Department/Handout via REUTERS

WASHINGTON (Reuters) – The U.S. military said on Thursday it had bolstered its “combat power” in southern Syria, warning that it viewed Iran-backed fighters in the area as a threat to nearby coalition troops fighting Islamic State.

The remarks by a Baghdad-based spokesman for the U.S.-led coalition battling Islamic State was the latest sign of tension in the region, where the United States has forces at the base around the Syrian town of At Tanf supporting local fighters.

“We have increased our presence and our footprint and prepared for any threat that is presented by the pro-regime forces,” said the spokesman, U.S. Army Colonel Ryan Dillon, referring to Iran-backed forces supporting Syrian President Bashar al-Assad.

Dillon estimated that a small number of Iran-backed forces had remained inside a so-called “deconfliction” zone meant to ensure the safety of U.S.-led coalition forces since a May 18 U.S. strike on their advancing formation.

Meanwhile, a larger number had been massing directly outside the zone, which was agreed between the United States and Russia, which is supporting Assad.

“We see that as a threat,” Dillon said.

The U.S. military has also dropped about 90,000 leaflets this week warning the fighters inside the zone to depart, one U.S. official said. Reuters had previously reported on the leaflet drop, citing Hammurabi Justice, a website linked to U.S.-backed Syrian rebel forces known as the Maghawir al Thwra group.

A copy of the leaflets provided to Reuters by the Pentagon told the Iran-backed fighters that any movement toward the At Tanf garrison “will be seen as hostile intent and we will defend our forces.”

“You are within an established deconfliction zone, leave the area immediately,” another read.

This southeastern area of the Syrian desert, known as the Badia, has become an important front in Syria’s civil war between Assad, backed by Iran and Shi’ite militias, and rebels seeking to oust him.

They are competing to capture land held by Islamic State, which is retreating as it comes under intense attack in Iraq and along Syria’s Euphrates basin.

Western-backed Syrian rebels said on Wednesday that Russian jets attacked them as they tried to advance against Iran-backed militias.

U.S.-backed rebels took Tanf from Islamic State last year, and regional intelligence sources say they mean to use it as a launchpad to capture Bukamal, a town on Syria’s border with Iraq and an important jihadist supply route.

The coalition’s presence in Tanf, on the Damascus-Baghdad highway, was also meant to stop Iran-backed groups from opening an overland route between Iraq and Syria, the sources say.

Damascus has declared the Badia and Deir al-Zor priorities in its campaign to re-establish control over Syria, which has been shattered by six years of a war that has killed hundreds of thousands of people.