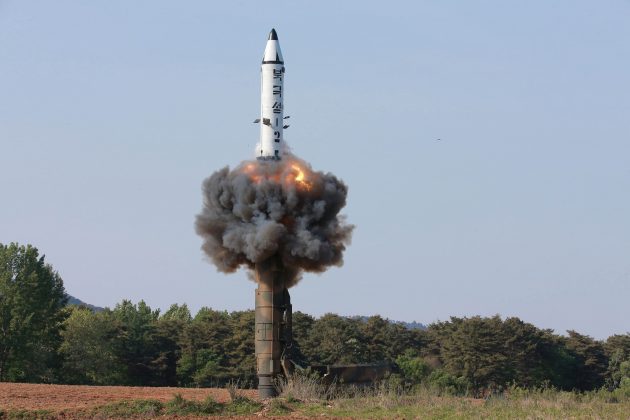 By Michelle Nichols and James Pearson

The draft resolution, seen by Reuters, would sanction four entities, including the Koryo Bank and Strategic Rocket Force of the Korean People’s Army, and 14 people, including Cho Il U, who is believed to head North Korea’s overseas spying operations.

If adopted, they would be subject to a global asset freeze and travel ban, making the listings more symbolic given the isolated nature of official North Korean entities and the sophisticated network of front companies used by Pyongyang to evade current sanctions.

It is the first Security Council sanctions resolution on North Korea agreed between the United States and China since President Donald Trump took office in January.

The measures could have been agreed by the council’s North Korea sanctions committee behind closed doors, but a public vote would amplify the body’s anger at Pyongyang’s defiance of a U.N. ban on ballistic missile launches.

The United States had been negotiating with China, Pyongyang’s sole major diplomatic ally, for five weeks on possible new sanctions. The pair reached agreement and circulated the draft resolution to the remaining 13 council members on Thursday.

It was not immediately clear if council veto power Russia would support the draft resolution after the United States imposed its own sanctions on Thursday on two Russian firms for their support of North Korea’s weapons programs.

While Russia has not indicated it would oppose U.N. sanctions or seek to dilute them, its ties with the United States are fraught and that could complicate its joining any U.S.-led initiative on North Korea.

There is no sign of any sustainable increase in trade between Russia and North Korea, but business and transport links between the two are getting busier.

That list included the Korea Computer Center (KCC), a state-run enterprise that develops computer software and hardware products. Headquartered in Pyongyang, KCC has offices in Germany, China, Syria, and the United Arab Emirates, according to North Korean state media.

North Korea’s Koryo Bank handles overseas transactions for Office 38, the shadowy body that manages the private slush funds of the North Korean leadership, according to a South Korean government database.

The U.N. Security Council first imposed sanctions on Pyongyang in 2006 over its ballistic missile and nuclear programs and has ratcheted up the measures in response to five nuclear tests and two long-range missile launches. North Korea is threatening a sixth nuclear test.

The Trump administration has been pressing Beijing aggressively to rein in North Korea, warning that all options are on the table if Pyongyang persists with its nuclear and missile development.

U.S. Secretary of State Rex Tillerson told the Security Council on April 28 that it needed to act before North Korea does. Just hours after the meeting, chaired by Tillerson, Pyongyang launched yet another ballistic missile.

Within days the United States proposed to China that the Security Council strengthen sanctions on North Korea over its repeated missile launches. Traditionally, the United States and China have negotiated new sanctions before involving the other council members.

Pyongyang has launched several more ballistic missiles since then, including a short-range missile on Monday that landed in the sea off its east coast.