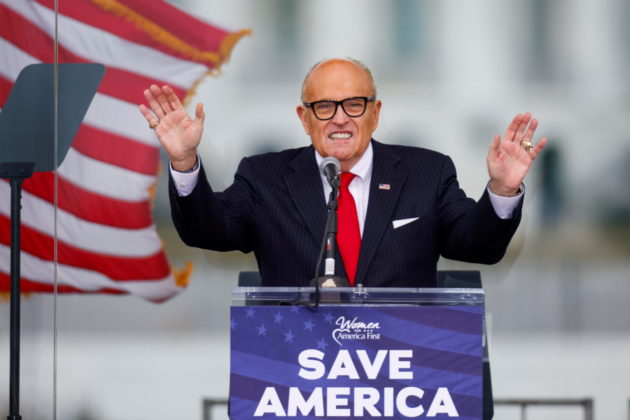 WASHINGTON (Reuters) -Federal investigators on Wednesday executed a search warrant at the Manhattan apartment of Rudolph Giuliani, the former New York City mayor and personal lawyer to former U.S. President Donald Trump, as they probe his business dealings with Ukraine.

A lawyer for Giuliani, Bob Costello, confirmed that a search warrant had been executed. Electronic devices were among the items seized, according to The New York Times. Giuliani did not immediately respond to a request for comment.

Federal prosecutors in Manhattan have been investigating Giuliani’s dealings in Ukraine.

While the search warrant does not mean Giuliani committed a crime, it signals that investigators persuaded a judge they believed criminal conduct occurred and that executing the warrant might uncover relevant evidence.

“This is a seismic moment in the investigation,” said Jessica Levinson, a professor at Loyola Law School in Los Angeles.

Giuliani’s role in Washington was complex, with the former mayor frequently proclaiming himself a business consultant and lawyer in the private sector even as he enjoyed extraordinary access to the halls of power.

Giuliani eventually became a key figure into whether Trump abused his office for personal political gain in his dealings with Ukraine.

His work included an investigation before the 2020 election into now-President Joe Biden and his son Hunter’s dealings in Ukraine. The Bidens have denied wrongdoing.

Two former Giuliani associates, Lev Parnas and Igor Fruman, have been charged with campaign finance violations and other crimes.

Parnas’ and Fruman’s work included efforts to help Giuliani dig up damaging information about the Bidens, and what prosecutors called an effort to remove then-U.S. Ambassador to Ukraine Marie Yovanovitch.

He later won wide acclaim as “America’s Mayor” for his efforts in helping New York City recover from the Sept. 11, 2001 attacks. Giuliani ran unsuccessfully for the 2008 Republican presidential nomination.

(Reporting by Karen Freifeld in New York, and Jan Wolfe and Doina Chiacu in Washington; Editing by Chizu Nomiyama and Jonathan Oatis)