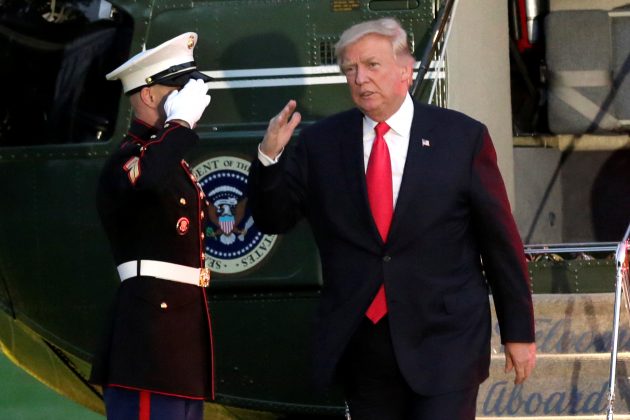 U.S. President Donald Trump salutes on the South Lawn of the White House upon his return to Washington, U.S., from the G20 Summit in Hamburg, July 8, 2017. REUTERS/Yuri Gripas

SAN FRANCISCO (Reuters) – A U.S. judge on Wednesday said he was “very much inclined” to maintain a court order that blocks President Donald Trump’s administration from carrying out a policy designed to threaten federal funds to so-called sanctuary cities.

At a hearing in San Francisco federal court, U.S. District Judge William Orrick III said a recent memo from the Justice Department that appeared to narrow the scope of Trump’s executive order on sanctuary cities did not remove the need for an injunction.

Trump issued the order in January directing that funding be slashed to all jurisdictions that refuse to comply with a statute that requires local governments to share information with immigration authorities.

Sanctuary cities generally offer safe harbor to illegal immigrants and often do not use municipal funds or resources to enforce of federal immigration laws. Dozens of local governments and cities, including New York, Los Angeles and Chicago, have joined the growing “sanctuary” movement.

The Trump administration contends that local authorities endanger public safety when they decline to hand over for deportation illegal immigrants arrested for crimes.

The Republican president’s moves to crack down on immigration have galvanized legal advocacy groups, along with Democratic city and state governments, to oppose them in court.

In a ruling in April, Orrick said Trump’s order targeted broad categories of federal funding for sanctuary governments and that plaintiffs challenging the order were likely to succeed in proving it unconstitutional.

Attorney General Jeff Sessions then issued a memo which formally endorsed a narrower interpretation of Trump’s order, saying that the only funds the government intended to withhold were certain grants tied to law enforcement programs.

In court on Wednesday, Deputy Assistant Attorney General Brett Shumate said the Sessions memo meant less than a million dollars were now at risk for Santa Clara County and San Francisco, so the injunction was no longer needed.

But Orrick said an injunction was still necessary because Trump could always order Sessions to issue new, broader guidance.

“The attorney general still has the ability to change that memo,” Orrick said.

The judge said he would also likely reject a Justice Department request to dismiss other claims by Santa Clara and San Francisco.