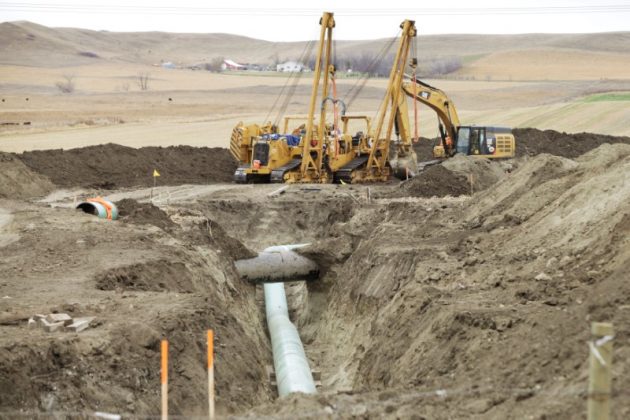 WASHINGTON (Reuters) – U.S. representatives from both parties asked the Department of Justice on Monday whether the domestic terrorism law would cover actions by protesters that shut oil pipelines last year, a move that could potentially increase political rhetoric against climate change activists.

Ken Buck, a Republican representative from Colorado, said in a letter to Attorney General Jeff Sessions, that damaging pipeline infrastructure poses risks to humans and the environment.

The letter, a copy of which was seen by Reuters, said “operation of pipeline facilities by unqualified personnel could result in a rupture – the consequences of which would be devastating.” It was signed by 84 representatives, including at least two Democrats, Gene Green and Henry Cuellar, both of Texas.

The move by the lawmakers is a sign of increasing tensions between activists protesting projects including Energy Transfer Partners LP’s Dakota Access Pipeline and the administration of President Donald Trump, which is seeking to make the country “energy dominant” by boosting domestic oil, gas, and coal output.

The letter asks Sessions whether existing federal laws arm the Justice Department to prosecute criminal activity against energy infrastructure. It also asks whether attacks on energy infrastructure that pose a threat to human life fall within the department’s understanding of domestic terrorism law.

The Department of Justice acknowledged receiving the letter and is reviewing it, a spokesman said.

A terrorism expert said it was ironic the lawmakers referred to the law, which defines “domestic terrorism” as acts dangerous to human life intended to intimidate civilians, but does not offer a way to prosecute anyone under it. David Schanzer, a homeland security and terrorism expert at Duke University, said the lawmakers’ request of Sessions “won’t have any legal ramifications, but possibly could be used for rhetorical value.”

A Minnesota court is considering charges against several protesters suspected of turning the valves on the pipelines last year. District Court Judge Robert Tiffany has allowed the defendants to present a “necessity defense.” That means they will admit shutting the valves, but may call witnesses, such as scientific experts, to offer testimony about the urgency of what they say is a climate crisis, activists said.