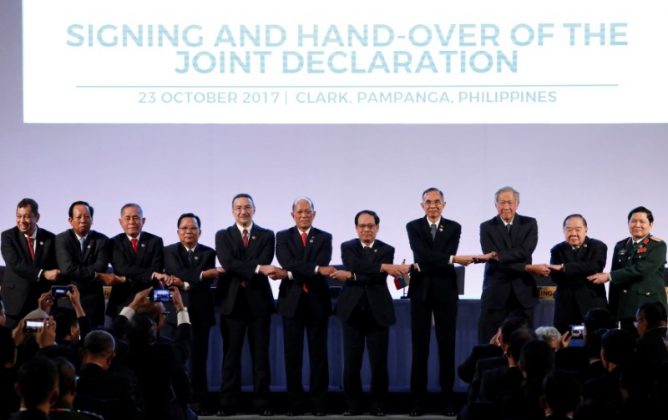 China claims almost the entire strategic waters through which about $3 trillion in ship-borne trade passes every year. Brunei, Malaysia, the Philippines, Taiwan and Vietnam also have claims, with tensions exacerbated by Beijing’s island-building and Washington’s increasing freedom of navigation patrols.

“Singapore supports it,” Defense Minister Ng Eng Hen told reporters when asked about China’s offer to hold maritime exercises. “We will push it … for the very reason that all ASEAN and China want that. If you exercise, you at least build understanding and trust.”

The exercises were discussed at a meeting between China and Singapore on the sidelines of the Association of Southeast Asian Nations (ASEAN) Defense Ministers’ Meeting at the former U.S. air force base at Clark, north of the capital Manila.

“We’ll work out the details. See the logistics… and find a suitable area where ASEAN and China navies can exercise together,” Ng said.

Singapore and China have not always seen eye to eye in recent months. Singaporean troops have trained in self-ruled Taiwan, an island China claims as its own, which had been an irritant in ties.

Ng said Singapore also had a proposal to “reduce risk of actual conflict” by agreeing to a new code of unexpected encounters in the air after ASEAN adopted a code to avoid sea encounters.

ASEAN and its eight regional partners, the United States, Russia, China, South Korea, Japan, India, Australia and New Zealand, had agreed to set up a “direct communications link” among them to ease tension.

Ng said the United States and Japan also welcomed the idea of exercises.

“Secretary (of Defense Jim) Mattis welcomed the exercises together with ASEAN countries,” he said.

Ng also hoped for the early conclusion of a code of conduct in the South China Sea after a framework agreement was reached this year to reduce conflicts and misunderstanding.