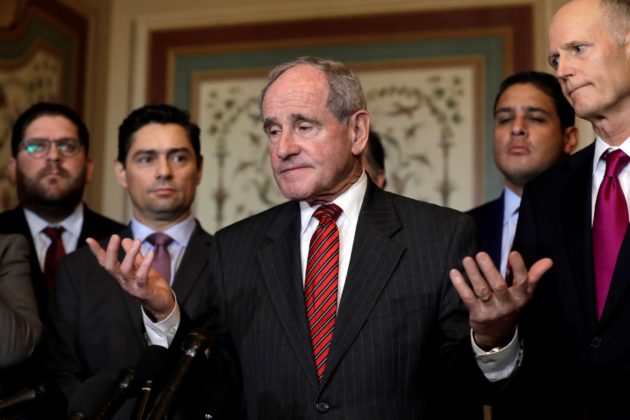 WASHINGTON (Reuters) – Members of the U.S. Congress blasted Iran after the attack on Saudi Arabian oil facilities, but expressed wariness about U.S. military action, especially before they have a clearer picture of who was behind it.

President Donald Trump said the United States was “locked and loaded” to hit back after Saturday’s attack, which knocked out more than half of Saudi Arabia’s oil production and damaged the world’s biggest crude processing plant.

Iran denied U.S. accusations it was to blame and said it was ready for “full-fledged war.”

Mitch McConnell, the Senate’s Republican majority leader, called it “a brazen attack” with significant implications for the global energy market and said he welcomed Trump’s preparation to potentially release oil from the Strategic Petroleum Reserve to stabilize markets if necessary.

“I hope our international partners will join us in imposing consequences on Iran for this reckless destabilizing attack,” McConnell said as he opened the Senate.

Many lawmakers stressed that Congress, not the president, has the right to declare war and warned against any quick military action.

Congress, with backing from both Republicans and Democrats, has passed – but Trump has vetoed – four bills seeking to push back against Trump’s strong support for the Saudi government, despite its human rights record and steep civilian casualties in the war in Yemen.

Senate aides said the administration was expected to begin providing classified briefings on Saturday’s attack for congressional staff and members as soon as Monday.

Senator Chris Murphy, a Democrat who is on the Senate Foreign Relations Committee, noted that the United States has long been wary of getting involved in conflicts between nations in the Middle East. He noted that Washington does not have a defense treaty with Riyadh.

“Why should the United States get dragged into a conflict that has more to do with Saudi and Iranian power in the Middle East than American power?” Murphy, a critic of Saudi Arabia on rights issues including its role in the Yemen war, told Reuters.

Senator Jim Risch, the Republican chairman of the foreign relations panel, warned of U.S. retaliation in case of an attack on U.S. troops.

“Iran should not underestimate the United States’ resolve,” he said. “Any attack against U.S. forces deployed abroad must be met with an overwhelming response – no targets are off the table.”

Republican Senator Rand Paul, another foreign relations committee member, said on CNN that any attack on Iran would constitute a “needless escalation” of war.