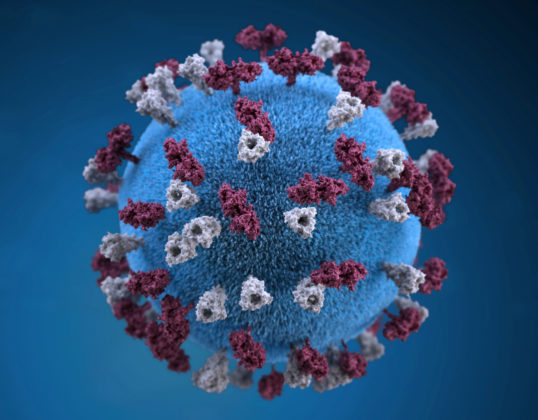 An illustration provides a 3D graphical representation of a spherical-shaped, measles virus particle studded with glycoprotein tubercles in this handout image obtained by Reuters April 9, 2019. Centers for Disease Control and Prevention (CDC)/Handout via REUTERS

(Reuters) – Health officials recorded no new cases of measles in the United States last week, marking the first week without new cases of the disease since the start of an outbreak largely linked to parents who declined to vaccinate their children.

The U.S. Centers for Disease Control and Prevention said on Monday it had recorded 1,241 cases of the highly contagious and sometimes deadly disease in 31 states as of Sept. 12.

The current outbreak of measles is the worst to hit the country since 1992, when 2,126 cases were reported, and threatens to end the nation’s measles-free status.

The majority of U.S. measles cases this year have occurred in children who had not received the measles-mumps-rubella vaccine, which confers immunity to the disease.

Federal health officials have attributed the outbreak in large part to a vocal fringe of U.S. parents who refuse to vaccinate their children because they believe, contrary to scientific evidence, that ingredients in them can cause autism.

U.S. Health and Human Services Secretary Alex Azar in an April that the current outbreak is “completely avoidable” and the unfortunate result of some people’s choice to deny the proven safety of vaccines.

The weekly increase in the number of cases has tapered down over the last few months, dropping to 7 new cases last week. The report of zero new cases is the latest indication that the outbreak is petering out after dozens of cases were reported per week earlier this year.

The disease was declared eliminated in the United States in 2000, meaning there was no continuous transmission of the disease for a year. Still, cases of the virus occur and spread via travelers coming from countries where measles is common.

(Reporting by Gabriella Borter in New York and Tamara Mathias in Bengaluru; Editing by Shailesh Kuber and Nick Zieminski)