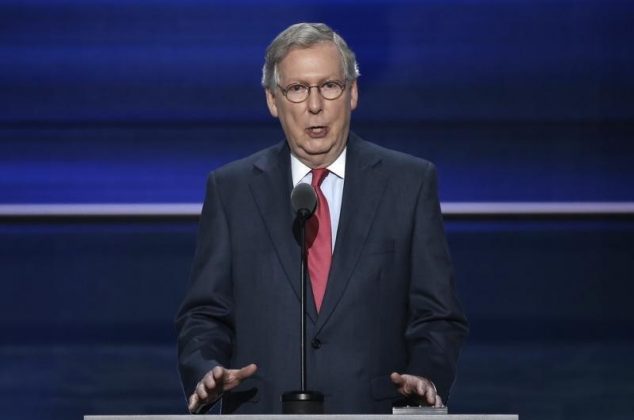 WASHINGTON (Reuters) – U.S. lawmakers sought on Wednesday to break a logjam over $1.1 billion in funding to combat the Zika virus, with the Senate possibly considering legislation as soon as next week, even as one congressman toted a jar full of mosquitoes to the House floor to condemn congressional inaction.

“Can you imagine the fears and anxieties if the mosquitoes were not in this jar?” Florida Republican David Jolly told his colleagues as he brandished the container holding about 100 of the insects in the House of Representatives chamber.

“Members of Congress would run down the hall to the physician’s office to be tested,” added Jolly, whose state is the first in the nation with local transmission of the mosquito-borne virus that has spread through the Americas.

The potential Senate Zika measure could advance as part of a broader legislative effort to temporarily keep federal agencies operating in the 2017 fiscal year that begins Oct. 1.

Republicans and Democrats huddled separately in closed meetings in both the Senate and House to see if they could reach a compromise during a 19-day work session this month, before lawmakers break for a recess in the weeks before the Nov. 8 U.S. election. Lawmakers returned to work this week after a seven-week summer recess.

“We’re looking for a way forward. And I’m hopeful and optimistic that we’ll be able to do that,” McConnell, a Republican, said of both a temporary agency funding bill and Zika money.

In February, President Barack Obama asked Congress to approve $1.9 billion in emergency funds to deal with the Zika virus, which can cause severe birth defects when pregnant women become infected.

Since then, both parties have backed $1.1 billion as the funding figure. But fights over side issues related to abortion and Obama’s signature healthcare law have bitterly divided the two parties.

One of the biggest controversies involves Democrats’ opposition to language, backed by Republicans, that they say would prevent Zika funds for abortion providers like Planned Parenthood, mainly in Puerto Rico.

The Miami Herald on Tuesday quoted Senators Marco Rubio of Florida and Senator Roy Blunt of Missouri, who chairs a Senate panel overseeing healthcare funding, suggesting the Planned Parenthood language might have to be dropped in order to reach a deal.

Aides to both senators declined to confirm or deny the accuracy of the quotes.

Republican Senator Susan Collins of Maine, asked by Reuters whether she thought Planned Parenthood funding restrictions should be eliminated from Zika legislation, said: “That would be my preference.”

Still, some Republicans were resisting a deal that would abandon the Planned Parenthood language in the Zika bill.

(Reporting by Richard Cowan and Susan Cornwell; Editing by Will Dunham)