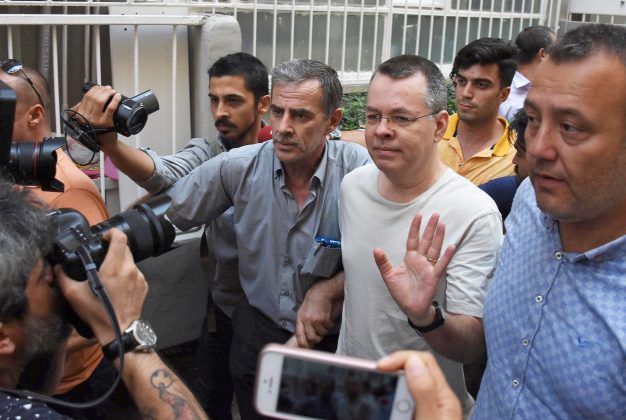 FILE PHOTO: U.S. pastor Andrew Brunson reacts as he arrives at his home after being released from the prison in Izmir, Turkey July 25, 2018. Picture taken July 25, 2018. Demiroren News Agency/DHA via REUTERS/File photo

WASHINGTON (Reuters) – The United States is warning more economic pressures may be in store for Turkey if it refuses to release a jailed American pastor, a White House official said on Tuesday, in a dispute that has further strained relations between the NATO allies.

The tough message emerged a day after White House national security adviser John Bolton met privately with Turkish ambassador Serdar Kilic about the case of evangelical pastor Andrew Brunson. Bolton warned him that the United States would not give any ground, a senior U.S. official said.

The White House official, speaking to Reuters on condition of anonymity, said “nothing has progressed” thus far on the Brunson case.

“The administration is going to stay extremely firm on this. The president is 100 percent committed to bringing Pastor Brunson home and if we do not see actions in the next few days or a week there could be further actions taken,” the official said.

Further actions would likely take the form of economic sanctions, the official said, who added: “The pressure is going to keep up if we’re not seeing results.”

Relations between Turkey and the United States have been soured by Brunson’s detention, as well as diverging interests on Syria. Trump doubled tariffs on imports of Turkish steel and aluminum last week, contributing to a precipitous fall in the lira.

The United States is also considering a fine against Turkey’s state-owned Halkbank for allegedly helping Iran evade U.S. sanctions. Earlier this month, the United States imposed sanctions on two top officials in President Recep Tayyip Erdogan’s cabinet in an attempt to get Turkey to turn over Brunson.

Brunson is accused of backing a coup attempt against Turkish Erdogan two years ago, charges that he has denied. He is being tried on terrorism charges.

Brunson has appealed again to a Turkish court to release him from house arrest and lift his travel ban, his lawyer told Reuters on Tuesday.