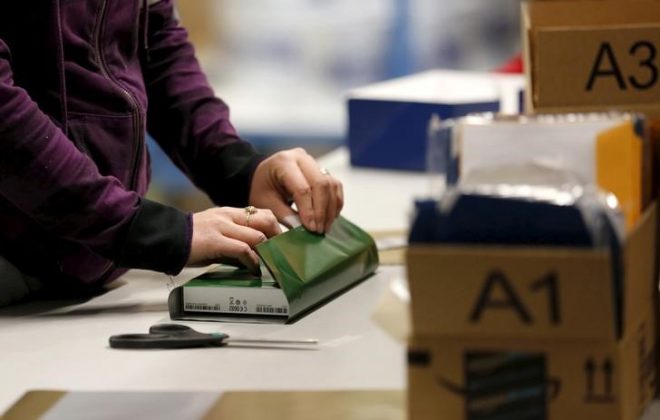 FILE PHOTO - A worker gift wraps a holiday order for a customer at the Amazon Fulfillment Center in Tracy, California, November 29, 2015. REUTERS/Fred Greaves

NEW YORK (Reuters) – U.S. online spending during the holiday shopping season is likely to grow 14.8 percent this year to $124.1 billion, far outpacing the 2.7 percent growth predicted for brick-and-mortar locations and highlighting the ongoing switch from stores to web shopping.

The forecast was released on Thursday by Adobe Analytics, the web analytics arm of Adobe Systems Inc. The company measures transactions from 80 of the top 100 U.S. retailers and trillions of customer visits to U.S. retail sites.

Online sales this year will benefit from an extra day between Cyber Monday to Christmas, which is likely to provide a $284 million sales boost, the report said.

Adobe also forecasts the best days for shopping online based on prices across product categories during previous years. For example, Thanksgiving is likely to be a good day to buy sporting goods as prices could be 13 percent lower than their average in the first 10 months of the year. Black Friday will still be a good option for television purchases as prices could be about 22 percent lower.

Apparel discounts could make items cheaper by 22 percent than average on Nov. 25, and toys are likely to be 19 percent cheaper on Cyber Monday, the report said.

The November and December holiday shopping season are critical for retailers, when they book an outsized portion of their annual sales and profits.

Overall U.S. holiday sales including stores and online in 2018 will increase by 4.3 percent to 4.8 percent from a year ago, when consumer spending surged to a 12-year high, according to The National Retail Federation.

The trade body said holiday sales growth will be higher than an average increase of 3.9 percent over the past five years but slower than last year’s 5.3 percent gain, when consumer spending grew the most since 2005, boosted by tax cuts.