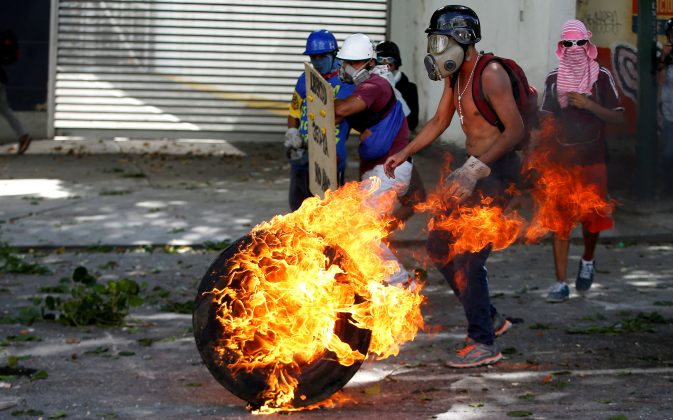 Demonstrators use a tire on fire to block a street at a rally during a strike called to protest against Venezuelan President Nicolas Maduro's government in Caracas, Venezuela July 26, 2017. REUTERS/Andres Martinez Casares

By Matt Spetalnick and Alexandra Ulmer

With clashes breaking out in some areas, a 30-year-old man was killed during a protest in the mountainous state of Merida, authorities said.

U.S. President Donald Trump spared Venezuela for now from broader sanctions against its vital oil industry, but such actions were still under consideration.

U.S. officials said the individual sanctions aimed to show Maduro that Washington would make good on a threat of “strong and swift economic actions” if he goes ahead with a vote on Sunday that critics have said would cement dictatorship in the OPEC country.

The leftist leader was also feeling the heat at home, where protesters backing the 48-hour national strike blocked roads with makeshift barricades and many stores remained shut for the day.

“It’s the only way to show we are not with Maduro. They are few, but they have the weapons and the money,” said decorator Cletsi Xavier, 45, helping block the entrance to a freeway in upscale east Caracas with rope and iron metal sheets.

The opposition estimated that some 92 percent of businesses and workers adhered to the strike, although it offered no evidence for the figure. Overall, fewer people appeared to be heeding the shutdown than the millions who participated in a 24-hour strike last week when five people died in clashes.

Local rights group Penal Forum said 50 people had been arrested and opposition lawmakers said at least 4 protesters had been shot. 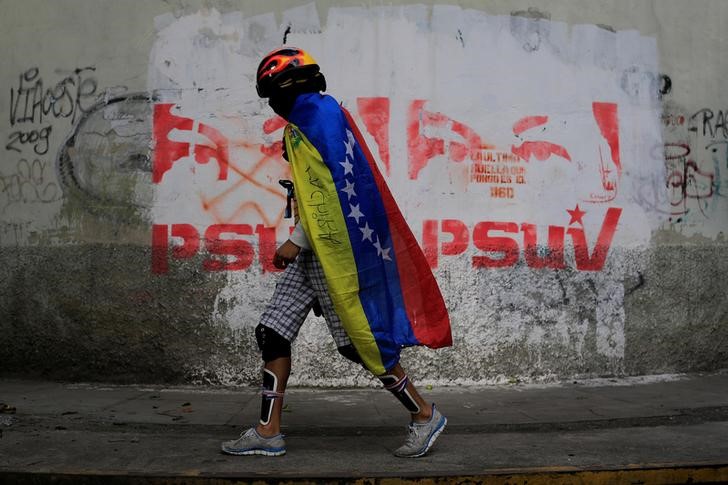 Maduro has vowed to push ahead with Sunday’s vote for a Constituent Assembly, which will have power to rewrite the constitution and override the current opposition-led legislature.

The successor to late socialist leader Hugo Chavez says it will bring peace to Venezuela after four months of anti-government protests in which more than 100 people have been killed.

One of the U.S. officials warned the sanctions were just an initial round and the administration was readying tougher measures. The most serious option is financial sanctions that would halt dollar payments for the country’s oil or a total ban on oil imports to the United States, a top cash-paying client.

But policy makers continue to weigh the potential risks of such sanctions, which include inflicting further suffering on Venezuelans and raising U.S. domestic gasoline prices.

Even some of Maduro’s opponents have cautioned that he could rally his supporters under a nationalist banner if the United States goes too far on sanctions as Venezuelans endure a brutal economic crisis with shortages of food and medicine.

At a campaign-style rally for Sunday’s vote, broadcast on state TV late on Wednesday, a defiant Maduro presented some of those sanctioned with replicas of a sword belonging to Latin American independence hero Simon Bolivar.

“Congratulations for these imperialist sanctions,” he said, before handing out the symbolic swords. “What makes the imperialists of the United States think they are the world government?”

Varela tweeted a picture of herself grinning and extending a middle finger toward the camera with a message that read: “This is my response to the gringos, like Chavez told them, ‘Go to hell, you piece of shit Yankees.'”

Elections boss Lucena is scorned by opposition activists, who have said that she has delayed regional elections and blocked a recall referendum against Maduro at the behest of an autocratic government. The opposition has also long accused PDVSA of being a nest of corruption. 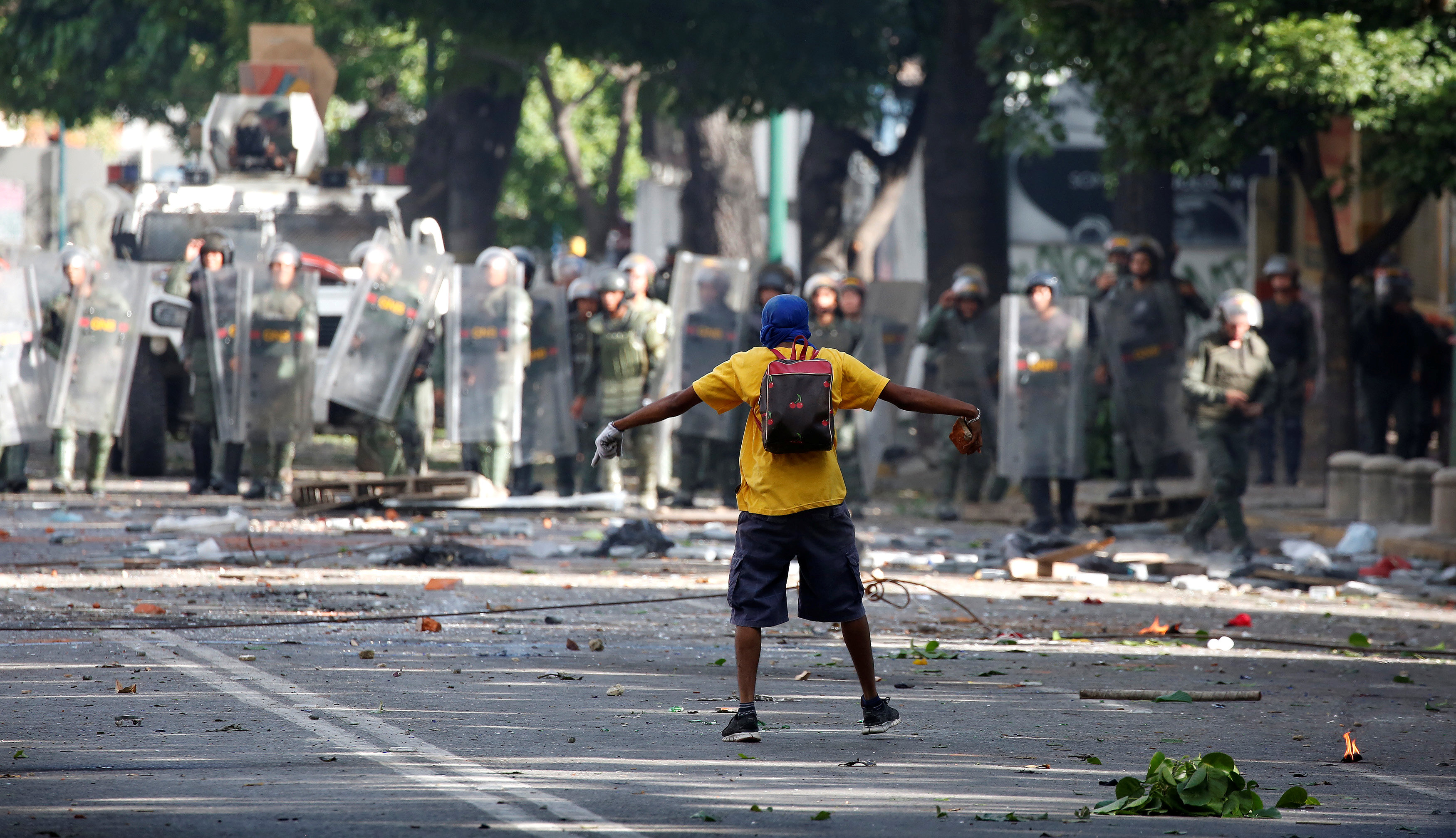 A demonstrator gestures while clashing with riot security force at a rally during a strike called to protest against Venezuelan President Nicolas Maduro’s government in Caracas, Venezuela July 26, 2017. REUTERS/Carlos Garcia Rawlins

The U.S. officials, who spoke to Reuters on condition of anonymity, said the individuals targeted for sanctions were accused of supporting Maduro’s crackdown, harming democratic institutions or victimizing Venezuelans through corruption, and that additional “bad actors” could be sanctioned later.

Punitive measures include freezing U.S. assets, banning travel to the United States and prohibiting Americans from doing business with them.

Sanctions were imposed on the chief judge and seven other members of Venezuela’s pro-Maduro Supreme Court in May in response to their decision to annul the opposition-led Congress earlier this year.

Assets in the United States and elsewhere tied to El Aissami and an alleged associate and frozen by U.S. order now total hundreds of millions of dollars, far more than was expected, one of the U.S. officials told Reuters.