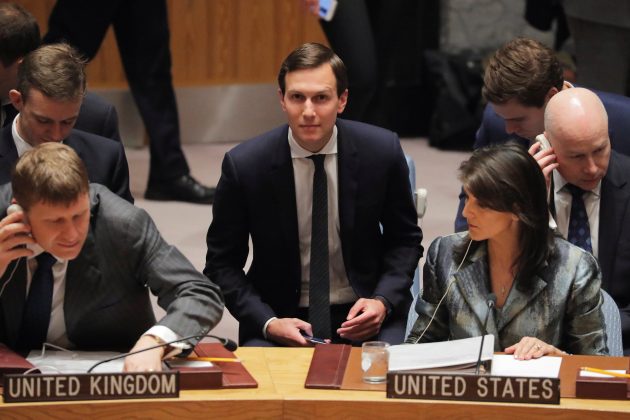 UNITED NATIONS (Reuters) – The United States is “ready to talk” Middle East peace with the Palestinians, U.S. Ambassador to the United Nations Nikki Haley said on Tuesday in remarks directed at Palestinian President Mahmoud Abbas during a meeting of the U.N. Security Council.

U.S. President Donald Trump’s son-in-law and senior adviser, Jared Kushner, and U.S. Middle East envoy Jason Greenblatt, who are working on a new peace plan, sat behind Haley. Speaking after Abbas made a rare address to the 15-member council, Haley gave no details of the U.S. plan.

“Our negotiators are sitting right behind me, ready to talk. But we will not chase after you. The choice, Mr. President, is yours,” Haley said. Abbas did not stay in the council chamber to listen to her.

White House spokesman Josh Raffel said Washington would present a peace plan “when it is done and the time is right.”

The Palestinians no longer view the United States as a neutral negotiator, and Abbas on Tuesday called for an international Middle East peace conference to be convened later this year.

The Palestinians are furious over the Trump administration’s recognition of Jerusalem as Israel’s capital in December and its decision to cut U.S. funding for the U.N. agency that helps Palestinian refugees (UNRWA).

Abbas, who shunned a visit by U.S. Vice President Mike Pence to the region last month, said the conference should include the Palestinians, Israel, the five permanent U.N. Security Council members – the United States, Russia, China, Britain and France – the European Union and the United Nations.

French U.N. Ambassador Francois Delattre told the council: “We are open to studying the development of the ways of international accompaniment for the peace process.” Deputy British U.N. Ambassador Jonathan Allen described U.S. leadership on the issue as “indispensable.”

Israel’s U.N. Ambassador Danny Danon told the Security Council that Abbas was part of the problem, not the solution, and that the “only way to move forward is direct negotiations” between Israel and the Palestinians.

Russian U.N. Ambassador Vassily Nebenzia said the so-called Quartet – made up of the United Nations, the United States, Russia and the EU – and the League of Arab States could play a role in kick-starting the stalled peace process.