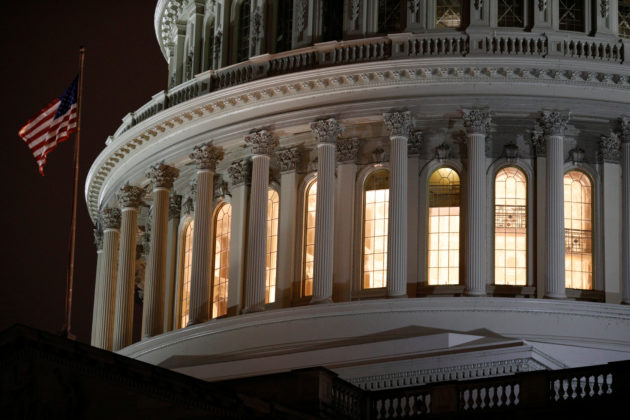 FILE PHOTO: The U.S. Capitol Building as seen ahead of a vote on the coronavirus (COVID-19) relief bill on Capitol Hill in Washington, U.S., March 25, 2020. REUTERS/Tom Brenner

WASHINGTON (Reuters) – The Republican-led U.S. Senate Armed Services Committee voted to require the Department of Defense to rename military bases named after Confederate generals, setting up a clash with President Donald Trump, who opposes that change.

The committee approved the measure, proposed by Democratic Senator Elizabeth Warren, as an amendment to the Senate version of the National Defense Authorization Act, or NDAA, a $740 billion bill setting policy for the Pentagon, announced on Thursday.

The committee adopted the amendment by voice vote. However, the panel’s Republican chairman, Senator Jim Inhofe, expressed concern, telling reporters on a conference call he wanted state input on any decision to change a base name.

The legislation also requires the Pentagon to change within three years the name of streets, aircraft and ships named for Confederate officers or honoring the Confederacy.

Americans have become more conscious about race following the death of African American George Floyd while in Minneapolis police custody. As demonstrations have swept the country, cities have removed Confederate statues and institutions have barred displays of the Confederate flag.

Trump on Wednesday drew a line in favor of keeping the names of 10 bases – including massive Fort Bragg in North Carolina and Fort Benning in Georgia – named for military leaders who battled U.S. forces 160 years ago in the civil war over slavery. He threatened to veto legislation changing them.

Prospects for the amendment making it through the Senate, where Trump’s Republicans have a majority, were not clear. A committee aide said “some sticking points” remained.

Nancy Pelosi, speaker of the Democratic-controlled House, backed the shift. “The American people know these names have to go,” she told a news conference.

The NDAA will not reach Trump until late this year, as it must first pass the Senate and House.