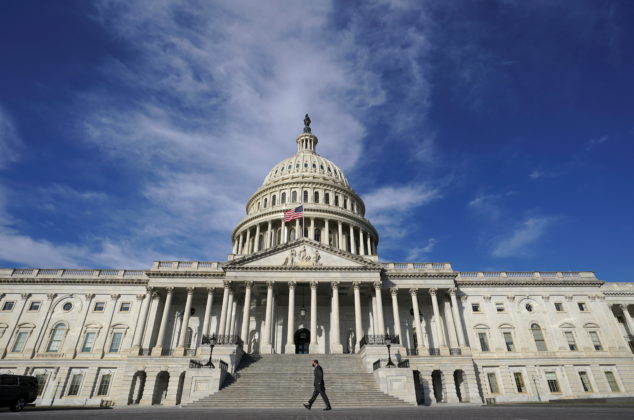 FILE PHOTO: A man makes his way past the U.S. Capitol on the day the House of Representatives is expected to vote on legislation to provide $1.9 trillion in new coronavirus relief in Washington, U.S., February 26, 2021. REUTERS/Kevin Lamarque

By Susan Cornwell and Andy Sullivan

WASHINGTON (Reuters) – President Joe Biden’s proposed $1.9 trillion coronavirus relief bill would phase out $1,400 payments to high-income Americans in a compromise with moderate Democratic senators, according to lawmakers and media reports.

The Democratic-controlled Senate expects to open debate on the package as early as Wednesday, with a final vote for passage seen later in the week. Before the bill hits the chamber floor, Democrats are negotiating limits to a measure Republicans have attacked as wasteful.

Senate Democrats said the proposal, which would block Americans earning $80,000 per year or more and couples earning $160,000 or more from receiving the $1,400 payments, was a good solution.

The income cutoff had been higher – $100,000 for individuals and $200,000 for couples filing jointly – in the House-passed version of the legislation.

“It’s an appropriate way of bringing this to a successful conclusion,” Senator Michael Bennet told reporters. Senator Debbie Stabenow said the caps would be “a reasonable compromise.”

The 100-seat chamber, where control is split 50-50 between Democrats and Republicans, is due to consider a motion to begin 20 hours of debate on the sweeping legislation, according to a Senate Democratic aide. A vote to proceed could be an early indicator of how much Republican opposition the package faces.

The bill would pay for vaccines and medical supplies, boost jobless assistance and send a new round of emergency financial aid to households, small businesses and state and local governments. Democrats aim to get it to Biden to sign into law before March 14, when some current benefits expire.

Republicans, led by Senate Minority Leader Mitch McConnell, have denounced the bill as a Democratic “wish list” containing provisions unrelated to the pandemic, which has killed more than 517,000 Americans and left millions more jobless.

But it is not clear that McConnell can replicate the monolithic party unity on display last Saturday, when the House of Representatives approved the bill with all Republicans in opposition.

Before the legislation comes to a final vote, Democrats will have to sort out a welter of competing ideas as they seek to advance the bill.

First to go will be a minimum-wage increase, which the Senate parliamentarian said last week could not be included in the package if Democrats want to invoke a special procedure that would allow them to pass the bill with a simple majority, rather than the 60 votes needed to advance most legislation in the chamber.

With Democrats and their allies controlling 50 seats, Vice President Kamala Harris might need to give them a tie-breaking vote.

Democrats have, however, shown no interest in dropping another partisan sticking point: $350 billion in aid for state and local governments, which face rising costs and uncertain tax revenues because of the pandemic. But they are negotiating what to include in that figure, with some advocating for spending on rural broadband internet service, a priority for senators from states with large rural populations.

A Reuters analysis found that Democratic-leaning states would get a larger share of that money this time around than they did under the first $150 billion of state and local aid that Congress approved last year.

Democratic Senator Joe Manchin, a key centrist, pushed to scale back enhanced unemployment benefits to $300 per week from $400. Lawmakers may also opt to discontinue those benefits if unemployment in a given state drops below a certain level, according to a Democratic aide.

The Senate could vote on the bill by the end of the week. The House would then have to sign off on the changes before Congress could send it on to Biden to sign into law.