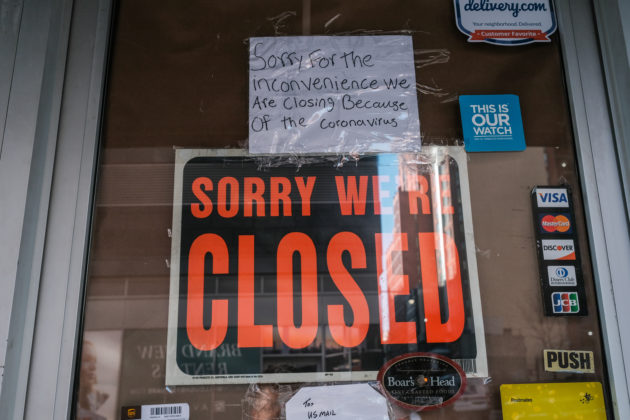 FILE PHOTO: A deli is seen closed, due to the outbreak of the coronavirus disease (COVID-19) in the Brooklyn borough of New York City, U.S., March 26, 2020. REUTERS/Stephen Yang

By Pete Schroeder and Michelle Price

WASHINGTON (Reuters) – The U.S. government’s $350 billion small-business rescue program entered its fourth day on Monday, plagued by technology and processing problems that are delaying disbursements to businesses hurt by the novel coronavirus, according to industry groups, bankers and an email seen by Reuters.

U.S. lenders, inundated by thousands of loan applications, struggled to access the government’s technology system for processing the paperwork over the weekend, and the paperwork itself changed more than once, the sources said.

“We know that your efforts have been frustrated with system issues, policy questions and slower than usual responses,” the Small Business Administration’s regional offices wrote to bankers on Saturday evening, according to an email seen by Reuters.

Many lenders have had problems signing up for new user accounts with the SBA’s platform, while bankers who already had accounts have had issues unlocking them or resetting passwords, the email said. It said the SBA was working to unlock all of the existing user accounts in one batch.

SBA also alerted lenders in the email that its technology platform’s loan authorization form was “not at all” compliant with the terms of the rescue program.

“Please do not close any loans using the current version of the loan authorization!” it said.

Congress created the unprecedented program as part of a $2.3 trillion stimulus package passed at the end of March to help businesses that have either shut down or have been dramatically curtailed by the coronavirus pandemic. Borrowers could apply for the loans via participating banks from Friday until June 30.

Over the weekend, the Independent Community Bankers of America (ICBA), which represents thousands of small banks, complained to the Treasury and SBA about the “failed technology” and “massive delays” its members were experiencing with the SBA platform, which was not designed to process the huge program.

Community bankers also took to social media to complain about the form changes and being locked out of the system, rebutting claims by President Donald Trump that all was going well.

“Going well?! Hell nearly every community bank in the nation is locked out of the … SBA platform!” Noah W. Wilcox, chief executive and chairman of Grand Rapids State Bank, who chairs the ICBA, tweeted on Sunday.

A senior Trump administration official on Monday defended the progress made so far and said launching such a huge program in just one week was unprecedented.

“As of today – Day 4 – we’ve surpassed $35 billion originated; more than 100,000 small businesses have successfully applied and more than 2,000 lending institutions are up and running,” the person said.

“Starting today, the SBA is offering a lender hotline and our 68 district offices across the country will be available to assist lenders,” the official added.

The Trump administration originally promised the loans in a matter of days. It was unclear how much of that $35 billion had been dished out to businesses as of Monday since the banks are the ones who disburse the funds. According to two industry sources, paperwork problems have prevented all but a fraction of banks from distributing the funds.

“It would have been better to have all these things resolved at the front end,” said Carrie Hunt, general counsel for the National Association of Federal Credit Unions.

Some small businesses say they have had problems even finding a willing lender given that many are backed up with thousands of applications and are not processing new clients.

Grant Geiger, CEO of EIR Healthcare, which makes modular healthcare products, said he spent Friday unsuccessfully searching for a bank to take his application after his current bank said it was not yet accepting submissions.

“We were ready last week. Friday morning, we had no place to go,” he told Reuters on Monday.