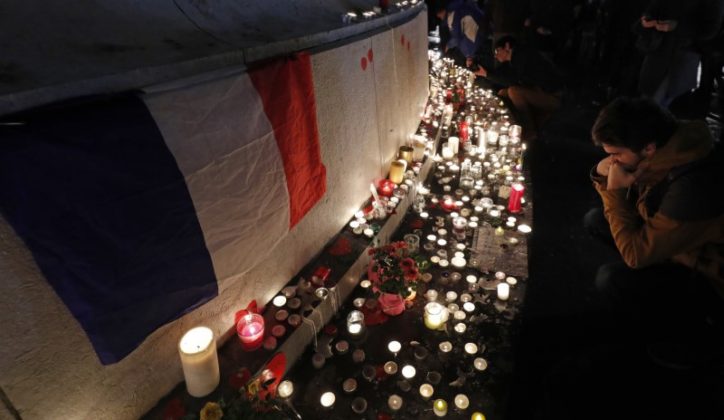 A man pays his respects during a gathering at the Place de la Republique in Paris, France, November 13, 2016, after ceremonies held for the victims of last year's Paris attacks which targeted the Bataclan concert hall as well as a series of bars and killed 130 people. REUTERS/Philippe Wojazer

WASHINGTON (Reuters) – A U.S. drone strike in Syria last week killed two Islamic State leaders linked to the Nov. 13, 2015 attacks in Paris that killed 130 people as well as a third militant convicted in absentia in Belgium for a disrupted plot, the Pentagon said on Tuesday.

The U.S. military said the strike took place on Dec. 4 in Raqqa, the Islamic State’s defacto capital in Syria.

“They were working together to plot and facilitate attacks on Western targets at the time of the strike,” Pentagon spokesman Captain Jeff Davis told reporters.

The Pentagon named two of the militants as Salah Gourmat and Sammy Djedou and said both men were involved with facilitating the 2015 machinegun and suicide bomb attacks on the Bataclan music hall, Paris bars and restaurants, and the Stade de France soccer stadium.

The third man killed, Walid Hamman, was a suicide attack planner and French national who was convicted in absentia in Belgium for a plot disrupted in 2015, Davis told reporters.

The three men were killed when a drone aircraft fired on them as they were driving in a car together, Davis said.

Islamic State, which has controlled parts of Iraq and Syria in recent years, has lost territory this year to local forces in those countries supported by a U.S.-led coalition of air strikes and advisers. Islamic State sympathizers around the world have carried out other shootings and bombings of civilians.

(Reporting by Phil Stewart; Editing by Will Dunham)