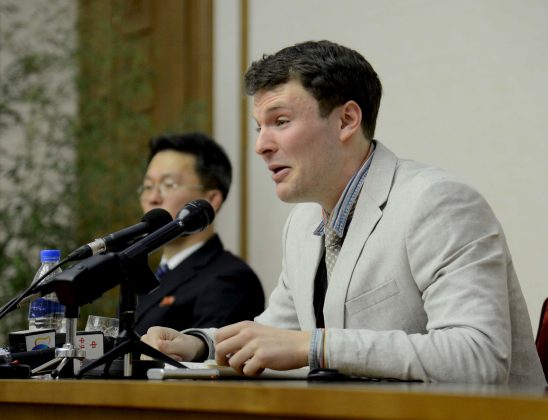 (Reuters) – An American student who had been imprisoned in North Korea for 17 months died from lack of oxygen and blood to the brain, an Ohio coroner said on Wednesday.

Otto Warmbier’s death on June 19 was due to an unknown injury that occurred more than a year before his death, Hamilton County Coroner Dr. Lakshmi Sammarco said at a news conference.

“We don’t know what happened to him and that’s the bottom line,” Sammarco said.

Warmbier’s parents could not be reached for comment on the coroner’s report.

The University of Virginia student was held by North Korea from January 2016 until his release on June 15. Warmbier, 22, was returned to the United States in a coma.

The coroner and a Sept. 11 report by her office cited complications of chronic deficiency of oxygen and blood supply to the brain in Warmbier’s death. Only an external examination of the body rather than a full autopsy was conducted at the request of Warmbier’s family.

North Korea had blamed botulism and the ingestion of a sleeping pill for Otto Warmbier’s problems and dismissed torture claims.

Warmbier died days after arriving back in the United States.

The native of Wyoming, Ohio, had been arrested at the airport in Pyongyang as he prepared to leave the reclusive communist country. He had been traveling with a tour group.

Warmbier was sentenced to 15 years of hard labor for trying to take from his hotel an item bearing a propaganda slogan, North Korea’s state media reported.

Saying his son had been tortured, Fred Warmbier told Fox News in an interview on Tuesday, “As we looked at him and tried to comfort him, it looked like someone had taken a pair of pliers and rearranged his bottom teeth.”

“Great interview on @foxandfriends with the parents of Otto Warmbier: 1994 – 2017. Otto was tortured beyond belief by North Korea,” President Donald Trump said on Twitter following the interview’s broadcast.

In response to a question at the news conference, the coroner said there was no evidence of trauma to Warmbier’s teeth nor was there evidence of broken bones.

The coroner’s report said that Warmbier’s body had multiple scars varying in size, including a large irregular one measuring 4.3 by 1.6 inches on the right foot.