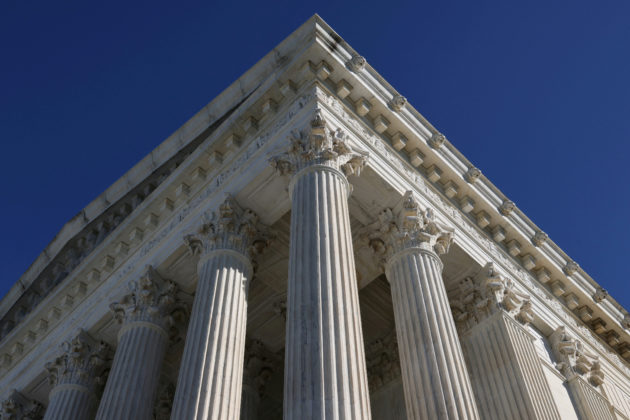 WASHINGTON (Reuters) – The lingering legacy of World War Two reached the U.S. Supreme Court on Monday as the justices weighed two cases involving claims by Jews in Germany and Hungary and their descendants whose property was taken amid persecution that culminated in the Holocaust.

The justices heard arguments in the two cases that hinge upon a federal law called the Foreign Sovereign Immunities Act that limits the jurisdiction of American courts over lawsuits against foreign governments.

In one case, the justices considered Germany’s bid to avoid facing a lawsuit in a U.S. court over medieval artwork that its former Nazi government pressured Jewish art dealers to sell in the 1930’s. The other concerns Hungary’s similar attempt to avoid litigation originally brought by 14 U.S. citizens who survived that nation’s World War Two-era campaign of genocide against its Jewish population.

The justices appeared more sympathetic to the arguments made by Germany than Hungary, while also recognizing foreign policy concerns of allowing such claims to be heard in U.S. courts.

The Germany case focuses upon a 17th century collection of medieval art known as the Welfenschatz that includes gem-studded busts of Christian saints, golden crucifixes and other precious objects. The plaintiffs – heirs of the art dealers – have said they are the rightful owners of the collection.

They sued in U.S. federal court in Washington in 2015, saying Germany owes them either the return of the artwork or more than $250 million in damages.

In 1935, a group of Jewish art dealers in Germany sold the collection to the state of Prussia, then being administered by prominent Nazi official Hermann Goering. The plaintiffs said that the sale was a “sham transaction” made under duress.

The art collection is currently in the possession of the Prussian Cultural Heritage Foundation, a German governmental entity.

Germany has said that U.S. courts have no role because the Foreign Sovereign Immunities Act does not allow claims over the alleged seizure of a citizen’s property by its own government. Some justices questioned that assumption, with Justices Neil Gorsuch and Clarence Thomas among others wondering if “stateless people” who are stripped of citizenship would be left without recourse.

Some justices said the language of the U.S. law seems to be clear that domestic property claims can be permitted if they fall within a broader genocide claim.

“It seems to cover the kind of property-taking that is at issue in this case,” Justice Elena Kagan said.

But Kagan and others also appeared to be worried about a ruling along those lines in part because it might require judges to undertake the contentious task of determining what constitutes a genocide.

A federal judge in Washington ruled against Germany in 2017. The U.S. Court of Appeals for the District of Columbia Circuit narrowed the case the following year, saying claims could proceed against the Prussian Cultural Heritage Foundation but not against Germany’s government itself.

The Hungarian Holocaust survivors filed suit in Washington in 2010 seeking restitution for possessions taken from them and their families when they were forced to board trains destined for concentration camps. A federal judge tossed out the lawsuit in 2017 but the D.C. Circuit revived it a year later, prompting Hungary to appeal to the high court.

Hungary has said that the possibility of “international friction” raised by the lawsuit means it should be dismissed and that the plaintiffs should sue in Hungary first.

The justices appeared reluctant to rule that foreign policy concerns could always be cited as a reason to toss out a lawsuit, but some also seemed reluctant to conclude that such issues should not be taken into account.

(Reporting by Lawrence Hurley; Additional reporting by Jan Wolfe; Editing by Will Dunham)