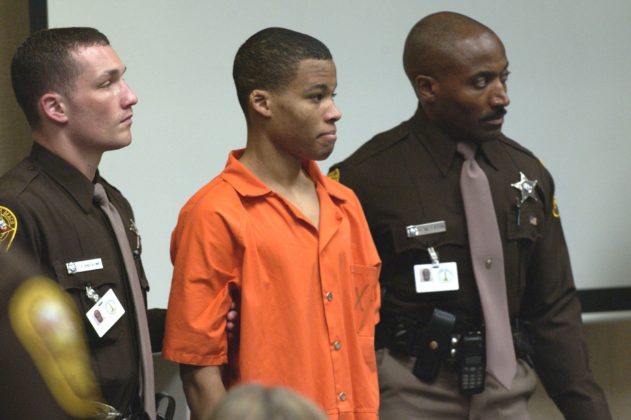 WASHINGTON (Reuters) – U.S. Supreme Court justices on Wednesday questioned whether a lower court sufficiently considered that a man convicted in the deadly 2002 “D.C. Sniper” shooting spree in the Washington area was a minor at the time of the crimes when he was sentenced to life in prison.

The nine justices heard arguments in an appeal by the state of Virginia objecting to the lower court’s decision ordering that Lee Boyd Malvo’s sentence of life in prison without parole be thrown out.

Malvo, now 34, was 17 during the shootings in which 10 people were killed. He participated with an older accomplice, John Allen Muhammad, who was given the death penalty.

If Malvo prevails, he and other prison inmates in similar cases involving certain crimes committed by minors could receive new sentencing hearings to allow judges to consider whether their youth at the time of the offense merits leniency.

Malvo’s best chance of victory appears to be an alliance of the court’s four liberal justices and at least one conservative justice. The most likely contender based on questions he asked during the argument would be Justice Brett Kavanaugh.

The shootings occurred over three weeks in Washington, Maryland and Virginia, causing panic in the U.S. capital region. Muhammad also was convicted and was executed in 2009 at age 48 in a Virginia state prison.

Virginia appealed after the Richmond-based 4th U.S. Circuit Court of Appeals ruled in 2018 that Malvo should be resentenced. The 4th Circuit cited Supreme Court decisions issued since the shooting spree finding that mandatory life sentences without parole for juveniles were unconstitutional, and that this rule applied retroactively.

Malvo received four life sentences in Virginia, where he was convicted of two murders and later entered a separate guilty plea to avoid the death penalty. He also received a sentence of life in prison without parole in Maryland.

Virginia’s appeal concerns the scope of a 2012 decision in which the Supreme Court ruled 5-4 that mandatory life sentences without parole in homicide cases involving juvenile killers violated the U.S. Constitution’s ban on cruel and unusual punishment. In 2016, the court decided that the 2012 ruling applied retroactively, enabling people imprisoned years ago to argue for their release.

Liberal Justice Elena Kagan appeared convinced that the 2012 ruling, which she authored, dictates the outcome.

“It can be summarized in two words, which is that youth matters,” Kagan said.

Fellow liberal Justice Stephen Breyer said the “odds are greater than 50-50” that the judge did not consider Malvo’s youth during sentencing.

Kavanaugh questioned whether the Virginia sentencing process gave judges leeway not to impose sentences of life without parole, a finding that would favor Malvo. Kavanaugh described that question as the “tough part of the case.”

President Donald Trump’s administration backed Virginia in the case. Among those backing Malvo’s claim in the case are Paul LaRuffa, who was shot and injured outside the restaurant he ran in Clinton, Maryland during the 2002 spree, and two relatives of people killed in shootings.