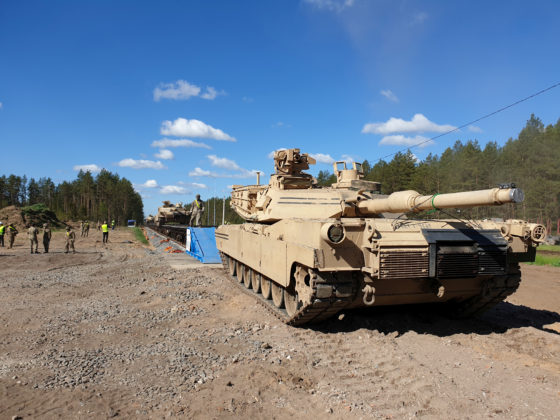 VILNIUS (Reuters) – U.S. troops and tanks will arrive in Lithuania on Friday for a two-month deployment near the Belarus border, but the government said the move was not a message to its Russian-backed neighbor, where protests continue over a disputed election.

In an announcement on Wednesday evening, NATO member Lithuania said U.S. troops will be moved from Poland for pre-planned military exercises. These are “defensive in nature and not directed against any neighbor, including Belarus,” it added.

However, the troops are arriving earlier and staying longer than the government had indicated before the outbreak of protests in Belarus over the Aug. 9 election that returned President Alexander Lukashenko, a key ally of Russian leader Vladimir Putin, to power.

Lukashenko has denied accusations by the Belarus opposition and Western countries that the vote was rigged and has resisted protesters’ demands to step down. He has accused NATO of a military buildup near Belarus’ borders, something the alliance denied, and has said he will ask for Russian military help if needed.

The deployment in Lithuania, which will begin on Friday and will last until November, includes 500 American troops and 40 vehicles, such as Abrams tanks and Bradley armored troop carriers, a Lithuanian army spokesman said.

On July 29, Lithuanian Defense Minister Raimundas Karoblis told BNS wire the United States would send a battalion-sized troop contingent – between 300 to 1,000 soldiers – in September, for two weeks’ training, beginning in the middle of the month.

He repeated that information on Aug. 4 in an interview with public radio LRT.

In addition to the U.S. deployment, up to 1,000 troops and military planes from France, Italy, Germany, Poland and others will take part in an annual exercise on Sept. 14-25, the Lithuanian army spokesman said.

The ministry did not state any plans for those troops to stay beyond Sept. 25.

Karoblis said earlier this month that there was a real danger Russia would send forces to Belarus.