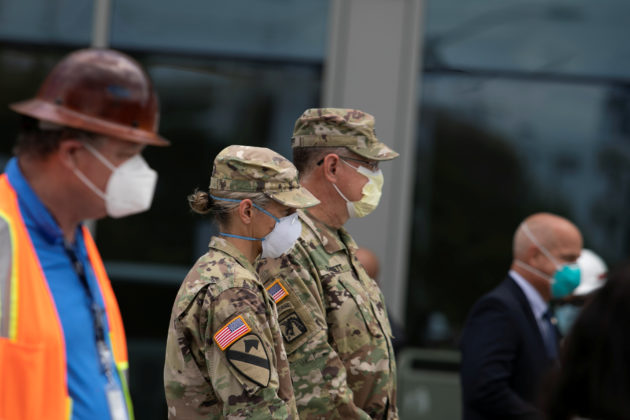 FILE PHOTO: Members of the U.S. Army Corps of Engineers stand outside the Miami Beach Convention Center as they prepare to build a coronavirus field hospital inside the facility, amid the coronavirus (COVID-19) disease outbreak, in Miami Beach, Florida, U.S., April 8, 2020. REUTERS/Marco Bello

WASHINGTON (Reuters) – The top U.S. infectious disease expert on Thursday warned against reopening the economy too soon after a downward revisions in the coronavirus pandemic’s projected death toll, while a third week of massive jobless claims underscored the economic damage caused by social distancing.

While several officials have hailed the apparent success of mitigation efforts in bringing death projections down to 60,000 from more than 100,000, Dr. Anthony Fauci said it was important that people continue to stay home to avoid a resurgence in the spread of the disease.

“We’ve got to continue to redouble our efforts at the mitigation of physical separation in order to keep those numbers down and hopefully even get them lower than what you’ve heard recently,” Fauci, director of the National Institute of Allergy and Infectious Diseases, said on CBS “This Morning.”

Stay-home orders that have closed non-essential workplaces in 42 states have drastically slowed the once-humming U.S. economy and thrown millions of people out of work.

With several state unemployment insurance offices deluged in recent weeks, 6.6 million workers applied for jobless benefits in the week ended April 4, the U.S. Labor Department said on Thursday. That followed 6.9 million jobless applications the week before, the most since the Great Recession of 2008.

In all, some 16.8 million American workers have applied for jobless benefits in the past three weeks.

Fauci, appearing on several morning television programs, affirmed that recent models showing fewer deaths than previously projected were evidence that social distancing and other efforts at keeping people apart were slowing the spread of the virus.

A University of Washington model often cited by U.S. and state officials projects that COVID-19, the respiratory ailment caused by coronavirus, will claim 60,415 American lives by Aug. 4, with the peak coming on Easter Sunday this weekend, when it projects that 2,212 will die

By Thursday morning, more than 432,000 U.S. residents had tested positive for the virus, and around 14,800 had died, according to Johns Hopkins University.

New Jersey Governor Phil Murphy on Wednesday tightened the virus-fighting efforts of his state, which has the second highest number of deaths, by halting all non-essential construction and ordering food and drug stores to limit the number of customers and require them to wear face coverings.

New York state, epicenter of America’s coronavirus crisis, set another single-day record of COVID-19 deaths on Wednesday, as veteran doctors and nurses voiced astonishment at the speed with which patients were deteriorating and dying.

Patients “look fine, feel fine, then you turn around and they’re unresponsive,” said Diana Torres, a nurse at Mount Sinai Hospital in New York City, the center of the nation’s worst outbreak.

The number of known coronavirus infections in New York state alone approached 150,000 on Wednesday, even as authorities warned that the official death tally may understate the true number because it omits those who have perished at home.

In Maryland, Pleasant View nursing home has become the site of one of the state’s worst outbreaks, 40 miles outside the U.S. capital of Washington, D.C.

Retired firefighter Gary Holmberg was only supposed to be there for a little while, recovering from a fall at his assisted living center. But about a month after he arrived, Holmberg, 77, became one of more than a dozen of the nursing home’s residents to die of COVID-19.

“He had a lot, lot more life left, there’s no question,” his said his son Rob Holmberg.

Officials have warned Americans to expect alarming numbers of coronavirus deaths this week, consistent with projections.

“We are in the midst of a week of heartache,” Vice President Mike Pence said during a White House briefing on Wednesday, but added, “we are beginning to see glimmers of hope.”

At the same briefing, President Donald Trump said he would like to reopen the U.S. economy with a “big bang” but not before the death toll is on the down slope.

Trump did not offer a time frame, but his chief economic adviser, Larry Kudlow, said on Tuesday a resumption of commerce was possible in four to eight weeks.