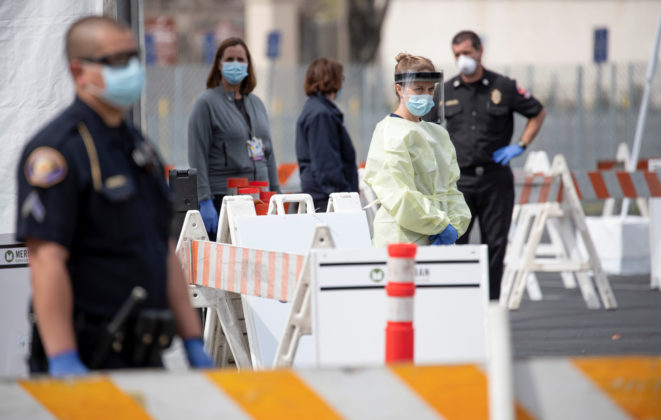 A health worker in protective gear waits to hand out self-testing kits in a parking lot of Rose Bowl Stadium during the global outbreak of the coronavirus disease (COVID-19), in Pasadena, California, U.S., April 8, 2020. REUTERS/Mario Anzuoni

By Nick Brown and Gabriella Borter

NEW YORK (Reuters) – New York state, epicenter of America’s coronavirus crisis, set another single-day record of COVID-19 deaths on Wednesday, as veteran doctors and nurses voiced astonishment at the speed with which patients were deteriorating and dying.

The number of known coronavirus infections in New York state alone approached 150,000 on Wednesday, even as authorities warned that the official death tally may understate the true number because it omits those who have perished at home.

“Every number is a face, ” said New York Governor Andrew Cuomo, who ordered flags flown at half-staff across New York in memory of the victims.

Doctors and nurses say elderly patients and those with underlying health conditions are not the only ones who appear relatively well one moment and at death’s door the next. It happens to the young and healthy, too.

Patients “look fine, feel fine, then you turn around and they’re unresponsive,” said Diana Torres, a nurse at Mount Sinai Hospital in New York City, the center of the nation’s worst outbreak. “I’m paranoid, scared to walk out of their room.”

Nearly 430,000 cases of COVID-19, the highly infectious lung disease caused by the coronavirus, were confirmed in the United States as of Wednesday afternoon, including more than 14,700 deaths. For the second straight day the virus killed at least 1,900 in a 24-hour period.

Cuomo said 779 people had died in the past day in his state. New Jersey reported 275 had died there. Both totals exceeded one-day records from just a day earlier.

Despite the grim figures, Cuomo said overall trends still appeared positive. Cuomo cited a drop in new hospitalizations and other data as evidence that New York’s social-distancing restrictions were “bending the curve,” helping to gain some control over the infection rate.

New York is one of 42 states where governors have issued “stay-at-home” orders and closed all non-essential workplaces.

While public health experts say such measures are vital for controlling the contagion, the restrictions have strangled the U.S. economy, leading to widespread layoffs, upheavals on Wall Street and projections of a severe recession.

Cuomo said the loss of life would likely continue at current levels or increase in days ahead as critically ill patients die after prolonged bouts hooked up to ventilators.

U.S. deaths due to coronavirus topped 14,700 on Wednesday, the second highest reported number in the world behind Italy, according to a Reuters tally.

New York state accounts for over a third of the U.S. total.

Officials have warned Americans to expect alarming numbers of coronavirus deaths this week, even as an influential university model on Wednesday scaled back its projected U.S. pandemic death toll by 26% to 60,000.

“We are in the midst of a week of heartache,” Vice President Mike Pence said during a White House briefing on Wednesday, but added, “we are beginning to see glimmers of hope.”

There were more discharges of patients than admissions for two days running, he said, adding: “Hosanna!”

But that comes as cold comfort to some healthcare workers on the front lines, who told Reuters they have treated patients while experiencing symptoms of the novel coronavirus themselves without being able to get tested.

In Michigan, one of the few hospital systems conducting widespread diagnostic screenings of staff, found more than 700 workers were infected – over a quarter of those tested.

The continued test kit shortages – even for the workers most at risk – is “scandalous” and a serious threat to the patients they treat, said Dr. Art Caplan, a professor of bioethics at the NYU Grossman School of Medicine.

At the White House on Wednesday, U.S. President Donald Trump said he would like to reopen the U.S. economy with a “big bang” but not before the death toll is on the downslope.

Trump did not offer a time frame, but his chief economic adviser, Larry Kudlow, said on Tuesday a resumption of commerce was possible in four to eight weeks.

Louisiana is “beginning to see the flattening of the curve” with the number of new coronavirus cases reported in the past 24 hours – 746 – lower than recent days, Governor John Bel Edwards said. Louisiana had been one of the nation’s hot spots.

California, like New York, had one of its highest single-day death tolls with 68 people dying of COVID-19 in the past 24 hours, Governor Gavin Newsom said. The state may not see its infection curve flattening until the end of May, requiring weeks more of social distancing, officials say.

New York City officials said a recent surge in people dying at home suggests the most populous U.S. city may be undercounting the loss of life.

So far New York City’s announced death toll has reflected only laboratory-confirmed COVID-19 diagnoses, mostly at hospitals. At least 200 people are believed to be dying at home in the city every day during the pandemic, authorities said.

Pence warned that Philadelphia and Pittsburgh were cities of “particular concern” as a possible future flash points in the epidemic.