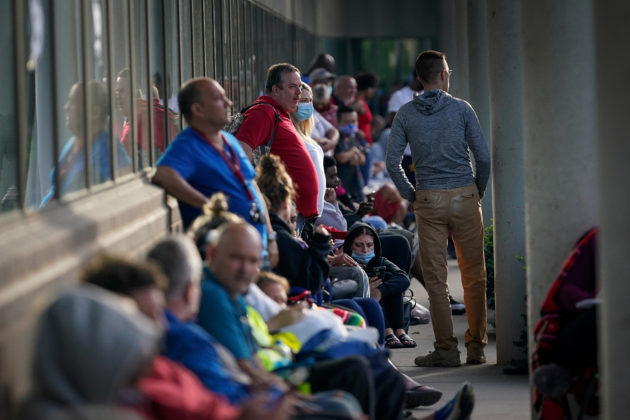 FILE PHOTO: People line up outside Kentucky Career Center prior to its opening to find assistance with their unemployment claims in Frankfort, Kentucky, U.S. June 18, 2020. REUTERS/Bryan Woolston/File Photo

Other data on Wednesday showed business spending on capital remained solid at the start of the fourth quarter, though momentum has cooled from the prior months. The economy is shifting into slower gear as the boost from more than $3 trillion in government coronavirus relief ends.

“There is a two-tier recovery from the pandemic recession where the top of society continues to spend as normal while the bottom-half of the country sits in long lines at food banks with the opportunities for employment few and far between,” said Chris Rupkey, chief economist at MUFG in New York.

Initial claims for state unemployment benefits increased 30,000 to a seasonally adjusted 778,000 for the week ended Nov. 21, the Labor Department said on Wednesday. It was the second straight weekly increase in claims. Economists polled by Reuters had forecast 730,000 applications in the latest week.

The weekly claims report, the most timely data on the economy’s health, was published a day early because of Thursday’s Thanksgiving Day holiday.

Unadjusted claims jumped 78,372 to 827,710 last week. Economists prefer the unadjusted number because of earlier difficulties adjusting the claims data for seasonal fluctuations due to the economic shock caused by the pandemic.

Including a government-funded program for the self-employed, gig workers and others who do not qualify for the regular state unemployment programs, 1.14 million people filed claims last week. There were at least 20.5 million people collecting unemployment benefits in early November.

The United States has been slammed by a fresh wave of coronavirus infections, with daily cases exceeding 100,000 since early November. More than 12 million people have been infected in the country, according to a Reuters tally of official data.

The respiratory illness has killed more than 257,000 Americans and hospitalizations are soaring, prompting state and local governments to reimpose a host of restrictions on social and economic life in recent weeks, which could keep claims above their 665,000 peak seen during the 2007-09 Great Recession.

U.S. stocks were mixed in early trade. The dollar dipped against a basket of currencies. U.S. Treasury prices rose.

Unemployment claims dropped from a record 6.867 million in March as about 80% of the people temporarily laid off in March and April were rehired, accounting for most of the rebound in job growth over the last six months.

That improvement, which spilled over to the broader economy through robust consumer spending, was spurred by the fiscal stimulus. In a separate report on Wednesday, the Commerce Department confirmed the economy’s historic pace of expansion in the third quarter.

Gross domestic product grew at an unrevised 33.1% annualized rate, the government said in its second estimate of third-quarter output. The economy contracted at a 31.4% rate in the second quarter, the deepest since the government started keeping records in 1947.