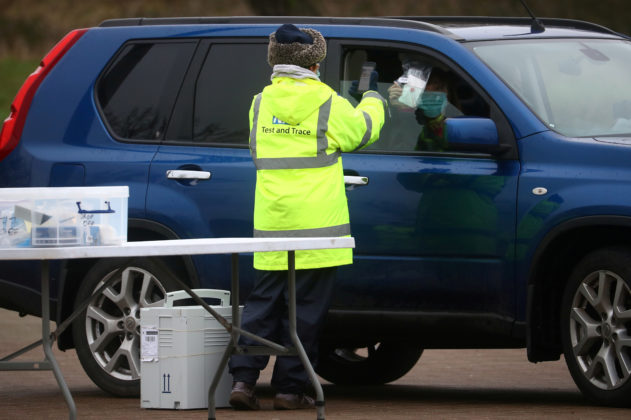 A worker collects a swab from a car window at a test centre in Goldsworth Park, as the South African variant of the novel coronavirus is reported in parts of Surrey, in Woking, Britain, February 1, 2021. REUTERS/Hannah McKay

LONDON (Reuters) – Eleven people in different regions have tested positive for the South African coronavirus variant without having any links to people who have travelled recently, prompting mass testing in the areas to contain the outbreak.

The government said on Monday the cases were now self-isolating and robust contact tracing had taken place to trace their contacts and ask them to self-isolate.

Residents in eight postcodes – three in London; two in the south east and one in the West Midlands, east of England, and the North West – would now be tested for the new coronavirus whether they are showing any symptoms or not under what is known as “surge testing” it said.

“Every person over 16 living in these locations is strongly encouraged to take a COVID test this week, whether they are showing symptoms or not,” the government said in a statement.

The government said in January it had detected cases of both the South African and Brazilian variants, but all were linked to travel.

In total, Public Health England said it had identified 105 cases of the South African variant since Dec 22.

All viruses mutate frequently, and scientists have identified several variants of the novel coronavirus found to be more transmissible than the original strain.

The emergence of more infectious variants has raised questions over whether vaccines will prove as effective in containing them.

Scientists have said the South African variant appears to be more transmissible, but there is no evidence it causes more severe disease. But several laboratory studies have found that it reduces vaccine and antibody therapy efficacy.

Clinical trial data on two COVID-19 vaccines – from Novavax and Johnson & Johnson – released on Saturday showed they had less ability to protect against the illness caused by the South African variant.

But the Surrey Local Resilience Forum said there was no evidence the regulated vaccine would not protect against it. The Oxford-AstraZeneca and Pfizer-BioNTech vaccines are being rolled out across Britain.