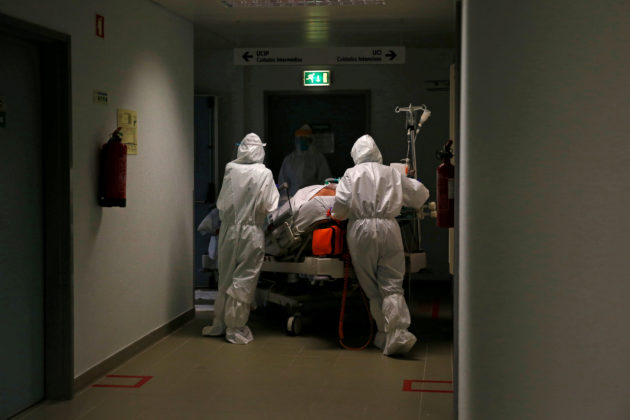 By Catarina Demony and Victoria Waldersee

LISBON (Reuters) – Portugal reported close to half of all its COVID-19 deaths in January, highlighting the severe worsening of the pandemic in a country whose plight has caused several European nations to offer help.

Hospitals across the nation of just over 10 million appear on the verge of collapse, with ambulances queuing sometimes for hours for lack of beds and some health units struggling to find enough refrigerated space to preserve the bodies of the deceased.

Austria is willing to take in intensive-care patients and is waiting for Portuguese authorities to propose how many patients they want to transfer, the Austrian embassy in Lisbon said.

Hard-hit neighbor Spain has offered help too, but Portugal is yet to accept, a Spanish foreign ministry source told Reuters, while Foreign Minister Arancha Gonzalez Laya told LaSexta TV both countries were in “direct contact every day, at all levels”.

In January, 5,576 people died from COVID-19, representing 44.7% of all 12,482 fatalities since the start of the pandemic in Portugal, health authority DGS said.

Portuguese officials have blamed the huge increase in the infection and death rates on the more contagious variant of the disease first detected in Britain, while acknowledging that a relaxation of restrictions on social movement over the Christmas holidays played a role.

The association representing funeral homes warned that public hospitals were running out of refrigerated space to preserve the bodies of COVID-19 victims, and some, including Portugal’s largest hospital Santa Maria, have installed extra cold containers to ease pressure on their morgues.

Portugal has the world’s highest seven-day rolling average of new daily cases per million inhabitants, according to data tracker ourworldindata.org.

With 865 coronavirus patients in intensive care and 6,869 in hospital wards, hospitals are running out of beds and there is a shortage of doctors and nurses.

Portugal has 850 ICU beds allocated to COVID-19 cases in its mainland public health system and another 420 for those with other ailments, according to the latest data.

For most, vaccination against the virus is the light at the end of the tunnel. But only roughly 70,000 people have been fully vaccinated with the two required doses so far. Those over 80 start getting their shots on Monday.