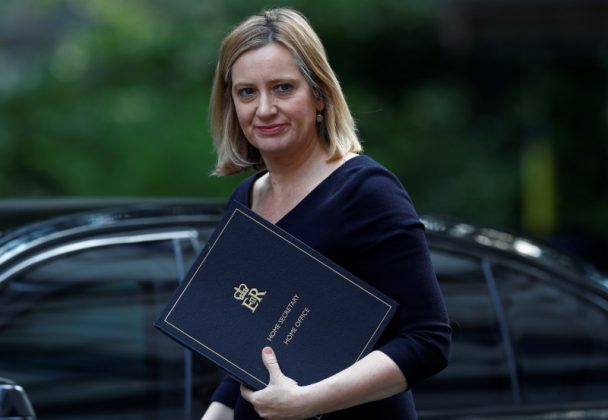 LONDON (Reuters) – The British government said on Wednesday it would not publish in full its report on the sources of funding of Islamist extremism in Britain, prompting opposition charges that it was trying to protect its ally Saudi Arabia.

The report, commissioned in November 2015 by then-Prime Minister David Cameron, was handed to the government last year and ministers have been under pressure to release its findings following three deadly attacks in Britain since March which have been blamed on Islamist militants.

Home Secretary (interior minister) Amber Rudd said that though some extremist Islamist organizations were receiving hundreds of thousands of pounds, she had decided against publishing the review in full.

“This is because of the volume of personal information it contains and for national security reasons,” she said in a written statement to parliament.

The review found the most common source of support for these organizations was from small, anonymous donations from people based in Britain, according to Rudd.

But it also found overseas funding was a significant source of income for a small number of organizations.

Critics were quick to see a cover-up to shield Saudi Arabia, a powerful Gulf ally of Britain and the world’s biggest oil exporter. The Home Office later released a statement denying this.

“Contrary to suggestions by some media outlets, diplomatic relations played absolutely no part in the decision not to publish the full report,” the statement said.

Lawmaker Caroline Lucas, co-leader of the Green Party who had been pressing the government to release the report, said Rudd’s statement was unacceptable.

“The statement gives absolutely no clue as to which countries foreign funding for extremism originates from – leaving the government open to further allegations of refusing to expose the role of Saudi Arabian money in terrorism in the UK,” she said.

That view was echoed by the Liberal Democrats and the main opposition Labour party.

“There is a strong suspicion this report is being suppressed to protect this government’s trade and diplomatic priorities, including in relation to Saudi Arabia,” said Labour’s home affairs spokeswoman, Diane Abbott.

“Foremost among these has been Saudi Arabia, which since the 1960s has sponsored a multimillion dollar effort to export Wahhabi Islam across the Islamic world, including to Muslim communities in the West,” the report said.

The Saudi government has demanded the HJS provide evidence for its claims, saying it was committed to fighting terrorism and violent extremism at home and across the world.

“If there is a list of names of Saudi individuals or organizations with proven links to UK terrorism, the think tank should present them and Saudi Arabia will deal with them,” Saudi Information Minister Awwad Alawwad said in a statement.