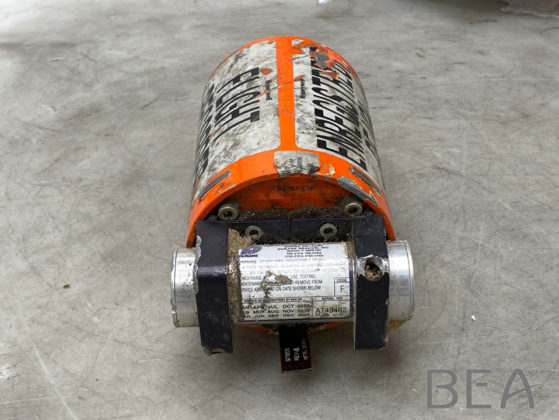 A view of the flight recorder from the Iranian missile-downed Ukraine International Airlines (UIA) Flight PS752 Boeing 737 jet, as work begins at the BEA investigation bureau in Le Bourget, France July 20, 2020 in this image obtained from social media. Twitter @BEA_AERO via REUTERS

KYIV (Reuters) – The transcript from the black boxes from a Ukrainian jet accidentally shot down by Iran on Jan. 8 confirm the fact of illegal interference with the plane, Ukraine’s deputy foreign minister wrote on Twitter on Friday.

Yevhenii Yenin said Kyiv was expecting an Iranian delegation to visit Ukraine next week for talks.

The Canadian Transportation Safety Board said on Thursday an international team examining the black boxes from the jet had completed a preliminary analysis of the data in France.

“Grateful to all partners who helped bring this moment closer. Black boxes from #PS752 were read out and deciphered successfully. The transcript confirmed the fact of illegal interference with the plane,” Yenin wrote on Twitter.

Iranian forces say they downed the Ukraine International Airlines Boeing 737 jet after mistaking it for a missile at a time of high tensions with the United States. All 176 people on board were killed.

Ukrainian Foreign Minister Dmytro Kuleba said this month that it was too soon to blame human error for the shooting down of the airliner and that many questions remained unanswered.

President Volodymyr Zelenskiy said in February that Kyiv was not satisfied with the amount of compensation Iran had offered.