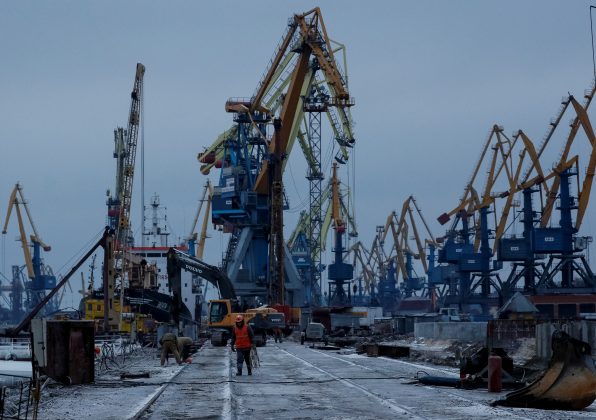 KIEV (Reuters) – Ukraine said on Tuesday it had resumed grain shipments from the Azov Sea, blocked for around 10 days after a military standoff with Russia in the Kerch Strait off Crimea.

Russia seized three Ukrainian naval ships and their crews on Nov. 25 after opening fire on them, accusing them of illegally entering its territorial waters.

Ukraine denied its ships had done anything wrong and accused Russia of military aggression. Its president, Petro Poroshenko, imposed martial law on Nov. 26 in parts of the country deemed most vulnerable to Russian attack.

“The passage of vessels with agricultural products through ports in the Azov Sea has been unlocked,” Ukraine’s agriculture ministry said on Tuesday in a statement.

“The loading of grain to vessels through the ports of Mariupol and Berdyansk is restored and carried out in regular mode,” it said.

Earlier, Ukraine’s infrastructure minister Volodymyr Omelyan had said the two ports – vital for eastern Ukraine’s economy – had been “partially unlocked” with the restoration of some free movement through the Kerch Strait.

Germany welcomed the news but also repeated its call for Russia to release the 24 Ukrainian sailors who are facing charges of illegally entering Russian waters.

“We will try to ensure that this conflict does not result in a serious crisis,” Foreign Heiko Maas told reporters in Brussels after a meeting of NATO foreign ministers also attended by officials from Ukraine and Georgia.

Germany wants to de-escalate the situation and work toward a political solution, he said, adding there would be further discussions on the issue this week but gave no details.

German Chancellor Angela Merkel discussed the Azov Sea standoff with Russian President Vladimir Putin on the sidelines of the G20 summit in Argentina.

(Reporting by Pavel Polityuk in Kiev and Andrea Shalal in Berlin; Editing by Gareth Jones)