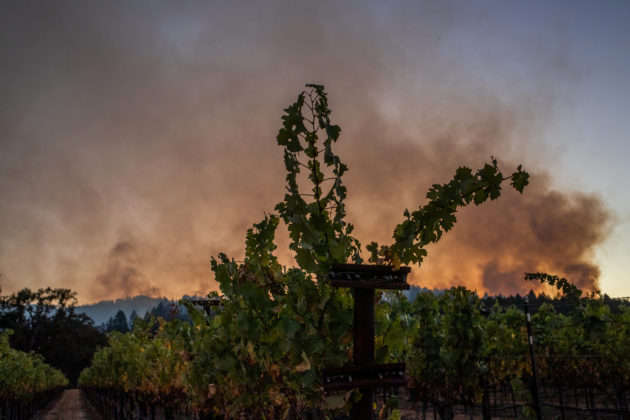 FILE PHOTO: A vineyard is seen in the foreground as smoke rises from the Bothe-Napa Valley State Park which was alight from the Glass Fire in Calistoga, California, U.S. October 3, 2020. REUTERS/Adrees Latif/File Photo

By Marco Hernandez and Simon Scarr

(Reuters) – When a wildfire swept down California’s Napa Valley in August, winemaker Patrick Elliot-Smith stayed put, fighting the encroaching flames with water pumps and laying fire breaks around his vines in a battle with nature that lasted three days.

He and his son managed to save their family-run Elan winery in the valley’s Atlas Peak appellation.

But smoke damage from the LNU Complex fire was so bad that they – along with dozens of other wineries damaged or burned down by some of the worst U.S. wildfires in living memory – decided not to harvest any grapes this year or sell fruit to other producers.

“We cannot afford a bad vintage,” Elliot-Smith told Reuters. “It looks like a lunar landscape here.”

When smoke is absorbed into a vine and concentrates in the fruit, it alters a grape’s chemistry and ultimately its taste, leaving some wines with “ashtray aromas” that may appear during fermentation or even as late as after bottling.

Smoke has blanketed much of the U.S. West and fires have charred more than 4 million acres (1.6 million hectares) in California so far in 2020, more than twice the previous record for any year.

The still active Glass Fire has destroyed dozens of buildings, including the mansion-like Chateau Boswell winery and a farmhouse containing storage, bottling and fermentation facilities at the Tuscan castle-style Castello di Amorosa.

Both producers’ premium reds sell for upwards of $200 a bottle.

The Newton Vineyard winery also went up in flames, according to a Reuters photographer who visited the site, observing rivulets of red wine mixed with ash flowing down its main access road.

Susan Meyer, owner of RustRidge Winery, said her crop was a write-off “both from the fire itself and the smoke that lingered for days. Many plants were burned by fire but others died from the heat exposure,” she said.

Her insurance provider alone was dealing with 600 claims for smoke taint, she added.

The true impact on a $70 billion-a-year national industry centered in California, Oregon and Washington state will not be known for months as the wildfire season is not yet over.

While grapes picked from the vine before exposure are safe from smoke taint, many winemakers with as yet unpicked harvests are awaiting the results of smoke testing from backlogged wine laboratories before deciding whether to proceed.

A notice this week on the website of Napa Valley-based ETS Laboratories warned of a wait till November for new tests.

Its co-founder and technical director, Gordon Burns, said it was too early to speculate as to the overall damage.

“Every location is different, and smoke exposure may be transitory and as little as none at all. Any fire impacts will certainly not be to the entire vintage in any of the affected winegrowing regions,” he added.

Eric Jensen, owner of Booker and My Favorite Neighbor wineries in California’s Paso Robles region, said he expected his crop to have escaped damaged “because of the distance that the smoke traveled to get to us.

“But in Napa and (neighboring) Sonoma, the proximity is causing issues.”

Further North in Oregon’s picturesque Willamette Valley, Jason Hanson of Hanson Vineyards expects his crews may only harvest five tons of grapes, down from at least 25 last year, due to smoke taint from nearby fires.

“With the dense smoke that we’ve had at the ground level for so long now, almost everything has to be affected or damaged,” Hanson said.

“I have a yearly fight with the birds. This year I’ll just let them win.”