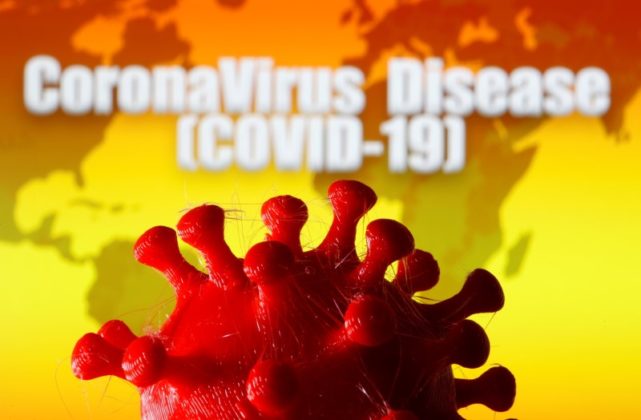 FILE PHOTO: A 3D-printed coronavirus model is seen in front of a world map and the words "CoronaVirus Disease (Covid-19)" on display in this illustration taken March 25, 2020. REUTERS/Dado Ruvic/Illustration

The one-dose Johnson & Johnson COVID-19 vaccine and the two-dose vaccine from Pfizer and BioNTech appear to protect against worrisome coronavirus variants despite diminished levels of antibodies that can neutralize the newer versions of the virus, two studies in the journal Nature suggest. The authors of both studies said other immune responses may be compensating. In one study, published on Wednesday, researchers experimented with blood from people who had received the J&J vaccine two months earlier. Compared to their levels of neutralizing antibodies against the virus that was circulating early in the pandemic, levels of neutralizing antibodies against variants first identified in the UK, South Africa, Brazil and California were about three-fold lower. However, the researchers observed other “robust” immune activity and cells whose responses against the variants were undiminished. In clinical trials, the researchers noted, the J&J vaccine protected against symptomatic COVID-19 in South Africa and in Brazil, where most cases were caused by the variants. Its effectiveness in these regions raises the possibility that these other immune responses may be contributing to protection, coauthor Dr. Dan Barouch of Beth Israel-Deaconess Medical Center in Boston, said in a statement. In a separate study using blood from recipients of the Pfizer/BioNTech shots, levels of antibodies that could neutralize concerning variants first identified in India and Nigeria were lower compared to an earlier version of the virus, researchers reported on Thursday. Still, they reported “robust neutralization” of all tested variants. Neutralizing antibodies, the researchers said, do not reflect all potentially protective vaccine responses.

Children with COVID-19 may be as contagious as adults

In a community-based study of COVID-19 patients who were not hospitalized, U.S. researchers found that children and adults with symptoms had similar viral loads, which suggests children can be just as contagious as grownups. “There has been a lot of debate around school openings and about whether children could transmit the virus and we thought this study could help answer some of these questions,” said Dr. Helen Chu of the University of Washington, who coauthored a report published on Friday in JAMA Pediatrics. Her team looked at 123 children and 432 adults with COVID-19 and found that nearly all of the adults had symptoms, compared to about two-thirds of the children. “Overall, people with symptoms had higher virus levels than people without symptoms,” Chu said. “However, when you looked within these groups – those with symptoms or those without – viral load was the same whether you were a child or an adult.” She noted that swab tests were only done once, so researchers cannot be sure they took place when patients’ viral loads were highest. But overall, she said, children in the community with SARS-CoV-2 infection can have virus levels similar to adults and can transmit it to others.

An experimental “booster” vaccine against COVID-19 that is taken by mouth has yielded promising early results in studies in rats, Israeli researchers said. The oral vaccine, MigVax-101, targets multiple sites on the coronavirus. Along with the spike protein on the surface of the virus, which is the target of currently available vaccines, the oral vaccine also targets two sites on the virus shell, which encapsulates its genetic material. In laboratory experiments, rats that had received two doses of vaccines that targeted the spike protein were given the oral booster. “These rats developed a much higher level of antibodies for neutralizing the disease than did control group rats that received a placebo or a third injection of the (original) vaccine,” said David Zigdon of MIGAL Galilee Research Institute Ltd, who coauthored a report posted on Wednesday on bioRxiv ahead of peer review. If it is proven safe for humans, an oral vaccine might trigger strong immune responses in the mucosal surfaces of the mouth and upper respiratory tract, which would in turn help block viral entry, the researchers speculated. An oral vaccine could be particularly useful in developing countries because it would avoid the need for distribution of needles and could be self-administered.