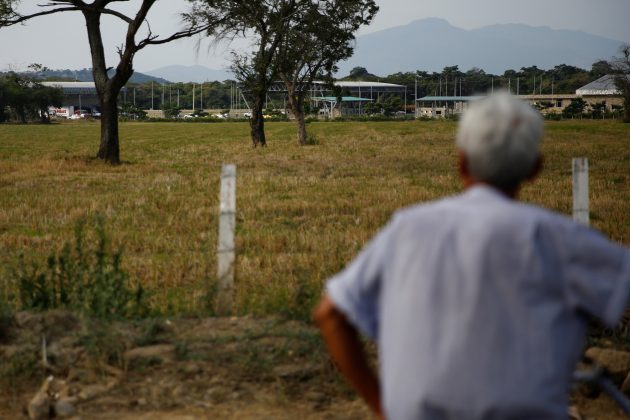 A man looks on after trucks arrived at a warehouse, where international humanitarian aid for Venezuela will be stored according to authorities, near the Tienditas cross-border bridge between Colombia and Venezuela, in Cucuta, Colombia February 7, 2019. REUTERS/Marco Bello

By Nelson Bocanegra and Anggy Polanco

The arrival of the aid convoy, which includes supplies provided by the United States, has increased the pressure on Maduro hours after a European Union-backed group called for dialogue and elections and warned against interventionism. 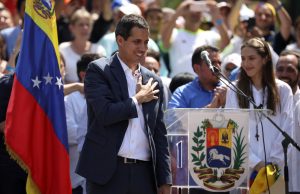 Maduro has rejected the aid convoy as a “political show” and vowed to remain in office despite dozens of nations around the world disavowing his leadership and recognizing opposition leader Juan Guaido as the country’s rightful head of state.

Escorted by police motorcycles, the trucks pulled into Cucuta, where Venezuelans were waiting to see whether Maduro’s government would clear the border road he has blocked and allow the humanitarian shipments to pass.

The crowd waved signs denouncing Maduro as a “cancer” and celebrated the arrival of the convoy.

“This gives me such hope, especially for the family that I left behind, my children, my wife,” said Israel Escobar, 42, a Venezuelan who came to Cucuta a year ago to sell ice-cream on the streets. “This is one more step towards ending that terrible regime.”

Across the border on the Venezuelan side, a group of around 60 protesters demanded that the aid be let through.

Maduro has overseen an economic collapse that has left millions struggling to eat and fueled an unprecedented migration crisis in the region.

An estimated 3 million Venezuelans have left the oil-rich OPEC country since 2015, some 800,000 of whom have ended up in Colombia.

But Maduro showed little sign of relenting on aid, as a bridge linking Colombia and Venezuela remained blocked with a cistern and two shipping containers.

“The so-called ‘humanitarian aid’ operation is a show, a cheap show, a bad show,” Maduro said in an interview with Mexican newspaper La Jornada published on Thursday. “You can be sure that it won’t disturb Venezuela.”

On Thursday, he appeared in an event at the presidential palace as part of a campaign by government supporters demanding an end to U.S. aggression against Venezuela.

Elliott Abrams, Washington’s special envoy on Venezuela, said the aid effort was being coordinated with Guaido’s team but that the aid would not be forced into Venezuela.

“Let it in, that’s what we’re asking, let it in,” Abrams told reporters at a State Department briefing, calling on members of Venezuela’s armed forces to persuade Maduro to step down or to disobey his orders.

He said the supplies would be delivered to Venezuelans when it was “logistically safe” to do so.

Offering a counterpoint to Washington’s hard-line stance, the EU and a group of Latin American governments that have kept a moderate line on Venezuela called for dialogue and fresh elections.

The EU-backed International Contact Group on Venezuela in its inaugural meeting in the Uruguayan capital of Montevideo said overly forceful intervention could aggravate the crisis.

“This is not only the most desirable result but is the only result if we want to avoid more suffering and a chaotic process,” Mogherini said.

Guaido has galvanized the opposition since taking over as head of Venezuela’s National Assembly in January. Last month, he declared himself interim president, opening the door for Washington and others to recognize him as the legitimate leader.

Maduro, who calls Guaido a U.S. puppet seeking to foment a coup, has maintained power with the backing of Venezuela’s military.

The websites of Venezuelan embassies in Brazil, Argentina and Mexico on Thursday posted statements recognizing Guaido, which the embassies quickly dismissed as the work of hackers, reiterating “absolute support” for Maduro.

The International Monetary Fund, which a new government in Caracas would likely call on for financial assistance, is awaiting guidance from its member countries on whether to recognize Guaido, IMF spokesman Gerry Rice said on Thursday.