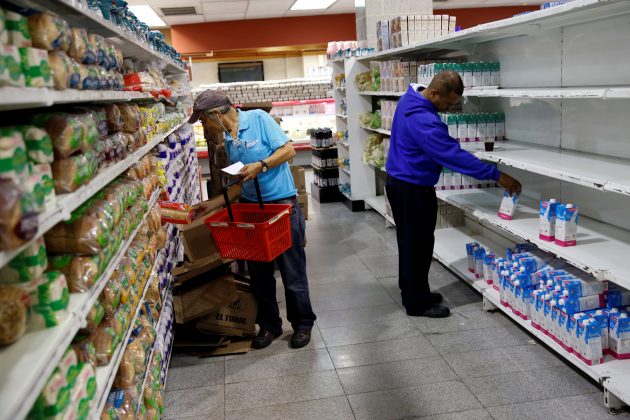 People look for groceries and goods at a supermarket in Caracas, Venezuela November 11, 2016. REUTERS/Carlos Garcia Rawlins

CARACAS (Reuters) – Topping off a year of economic crisis that left many Venezuelans hungry, the country’s socialist government is flooding shops with products ahead of Christmas, at prices that most cannot afford.

Thousands of containers of festive food and toys are on their way, say authorities, and while supermarket shelves appear fuller, prices are ludicrously high for people earning just tens of dollars a month at the black market exchange rate.

“If you’ve got money, then of course you’re happy,” said Geronimo Perez, selling newspapers in the center of Caracas. “But if not, you’re left empty-handed.”

A 1.8-kilogram (4 lbs) carton of powdered milk costs the equivalent of $20 in Caracas at the black market exchange rate. That’s more than two weeks’ work at Venezuela’s minimum wage.

The country is undergoing major economic and social problems, as a decade and a half of currency controls, price controls and now low oil prices have left the government and businesses without sufficient hard currency to import goods.

This means supermarkets are empty of basics from rice to chicken, let alone Christmas gifts.

“AT LEAST THE CHILDREN”

Queues at supermarkets that stock regulated goods can run into hundreds or thousands, many of whom are left disappointed.

President Nicolas Maduro blames the problems on an “economic war” waged against the country and his government has promised that supply will be “sufficient” in December.

The bolivar currency has weakened some 40 percent against the dollar at the black market rate in the last month alone. One dollar buys nearly 1,900 bolivars on the street, compared to just 10 bolivars at the government’s strongest official rate.

This means that importers bringing products in on the black market are paying even more and passing those costs onto consumers, fueling inflation that the IMF says will surpass 2,000 percent next year.

Anger is mounting and hundreds of thousands of people have taken to the streets in recent weeks hoping for change. Some though, are pleased with the festive respite.

“It’s better that at least we can celebrate a little amid all these problems, at least the children,” said Karina Mora, as she left a supermarket in the center of Caracas with her two small children.