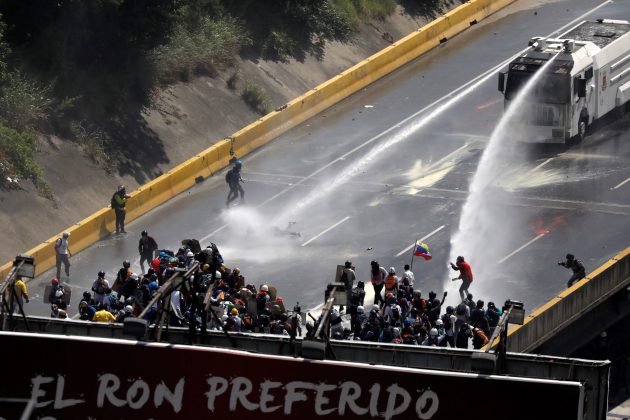 Riot security forces release jets of water from their water cannon on demonstrators during riots at a march to the state Ombudsman's office in Caracas, Venezuela May 29, 2017. The banner reads "The favorite Ron". REUTERS/Carlos Garcia Rawlins

CARACAS (Reuters) – Two Venezuelan opposition leaders were wounded on Monday by security forces dispersing protests in the capital Caracas against President Nicolas Maduro, according to one of the leaders and an opposition legislator.

Maduro’s adversaries have for two months been blocking highways and setting up barricades in protests demanding he call early elections and address an increasingly severe economic crisis that has left millions struggling to get enough to eat.

Fifty-nine people have died in the often violent street melees, which Maduro calls an effort to overthrow his government.

“We were ambushed,” said two-time presidential candidate Henrique Capriles, who accompanied protesters in an effort to march to the headquarter of the government ombudsman’s office but was blocked by security forces.

“This government is capable of killing or burning anything,” Capriles said in a press conference.

He said 16 others were injured in the march, adding that he would file a complaint about the issue with state prosecutors.

Legislator Jose Olivares, who is a doctor, tweeted a picture of a bruise on Capriles’ face that he said was the result of a soldier hitting him with a helmet during the clashes.

During the same march, opposition deputy Carlos Paparoni was knocked to the ground by a water cannon sprayed from a truck, requiring that he receive stitches in his head, Olivares said.

The Information Ministry did not immediately respond to a request for comment.