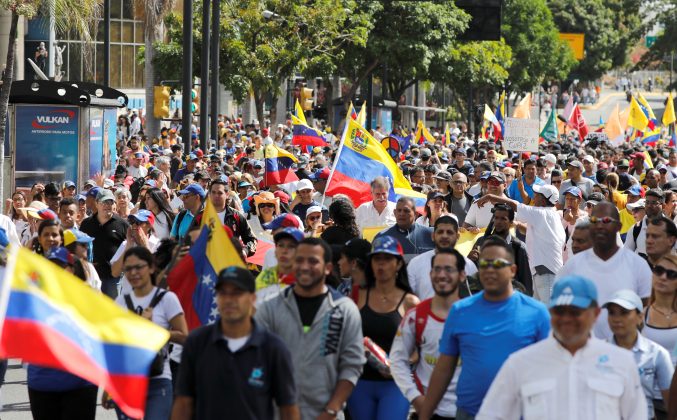 Opposition supporters take part in a rally to commemorate the Day of the Youth and to protest against Venezuelan President Nicolas Maduro's government in Caracas, Venezuela February 12, 2019. REUTERS/Manaure Quintero

Venezuela’s opposition supporters returned to the streets nationwide on Tuesday to keep the heat on embattled President Nicolas Maduro and demand he allow humanitarian aid into the country where food and medicine shortages are rife.

The rallies occurred nearly three weeks to the day that opposition leader Juan Guaido invoked a constitutional provision to assume the presidency, arguing that Maduro’s re-election last year was a sham.

Most Western counties including the United States have recognized Guaido as Venezuela’s president, but Maduro retains the backing of Russia and China as well as control of state institutions including the military.

The sides are at loggerheads over the humanitarian aid. The opposition says the U.S.-backed aid including food and medicine is needed due to Maduro’s mishandling of the once-buoyant OPEC nation’s economy, and they are working to get it delivered.

Maduro has blocked the aid and denounced it as a U.S.-orchestrated show to overthrow his government. He has demanded instead that Washington lift economic sanctions.

“They have to let the aid in because people are dying from lack of medicine,” said 72-year-old Armida Quintana, who stood on a plastic stool to see above crowds of thousands, many wearing Venezuelan flags as capes.

“Little by little we have convinced everyone that Maduro is an impostor and a tyrant.”

U.S. supplies were among the first delivered to a collection point established in the Colombian border town of Cucuta.

“The Ku Klux Klan governing the White House today wants to take possession of Venezuela,” Maduro said in an interview with the BBC. “Venezuela is not a country of famine. In the west, Venezuela’s situation is distorted to justify any sort of intervention.”

On Venezuela’s border with Colombia, smaller opposition protests formed. In the town of Urena, across from Cucuta, several hundred people dressed in white danced in the streets, waving flags and chanting profanities against top government officials.

“We want a prosperous Venezuela, as it was before,” said Mery Marin, a 25-year-old electrician. She said most young people from Urena had emigrated to escape the crisis.

Guaido, who galvanized the opposition after several years of in-fighting, has vowed it will keep protesting to pressure Maduro to step down so new presidential elections can be held. There will be an all-night vigil on Tuesday in a Caracas square to demand that Maduro let aid in.

Maduro’s critics had staged two major rounds of protests, the last in 2017, against what they call his dictatorship, but they subsided in the wake of a government crackdown. The current wave kicked off on Jan. 23, with a massive protest in Caracas during which Guaido was sworn in as president in front of thousands of supporters.

The ruling Socialists, who have been in power for two decades, rallied in Caracas on Tuesday to “demand respect of the fatherland’s sovereignty.” A few thousand people gathered, including many state employees, holding “Defend the Country” banners.

“We are here supporting the revolution. We’re against the invasion the gringos want to launch here,” said Marcos Velasquez, a 32-year-old Food Ministry employee.

Guaido on Monday announced the first delivery of humanitarian aid, including vitamin and nutritional supplements for children and pregnant women, to a network of health centers. He did not explain how it had gotten into the country.

He said it was a small-scale donation, given that the government has so far blocked deliveries from Cucuta.

Guaido has appealed to the military to disobey orders and let aid in, though there were not yet any clear signs of that happening. He has also promised amnesty.

Maduro’s adversaries say he has run roughshod over democratic institutions and ravaged the nation’s economy through nationalizations and a corruption-riddled exchange control system. Maduro counters that he is victim of an “economic war.”