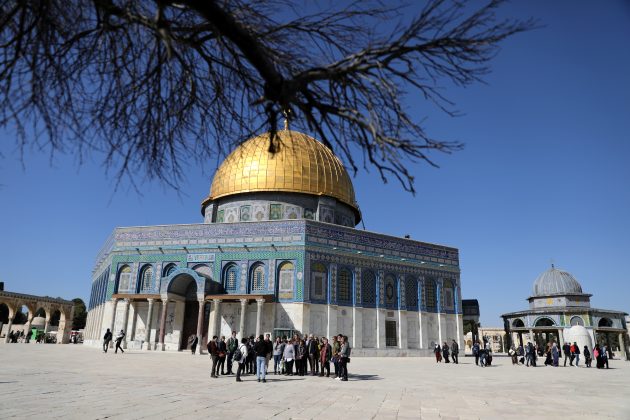 Tourists take part in the Dual Narrative tour lead by tour guides, Noor Awad, a Palestinian from Bethlehem, and Lana Zilberman Soloway, a Jewish seminary student, stand next to the Dome of the Rock on the compound known to Jews as Temple Mount and to Muslims as The Noble Sanctuary, in Jerusalem's Old City, February 4, 2019. Picture taken February 4, 2019. REUTERS/Ammar Awad

By Rami Ayyub and Stephen Farrell

JERUSALEM (Reuters) – On a Jerusalem plaza looking up at the Western Wall and the Dome of the Rock, a crowd gathers in front of two guides, listening attentively, a common sight in a city packed with pilgrims and tourists visiting its religious landmarks.

What is unusual is that one of the guides is Palestinian, one is Israeli, and they are taking turns to give their perspectives on the city known to Jews as Yerushalayim and to Arabs as al-Quds..

“We are in Jerusalem, which is the capital of the Jewish state. We are in one of the holiest places in the world for Christianity. And the keys are held by Muslim families,” said Israeli guide Lana Zilberman Soloway, who spoke first as the group reached the Church of the Holy Sepulcher where Jesus is believed to be buried. “And all three coexist at the same time.”

Her counterpart, Noor Awad, from Bethlehem in the occupied West Bank just a few km (miles) away, took a different view of the status quo, noting that Muslims and Christians from the West Bank or Gaza need Israeli travel permits to worship here.

“For Palestinians, this is the capital of Palestine and the capital of their country,” said Awad, 28. “If you don’t get that permission, you can’t come actually here to pray.&nbsp;So the place is being used, and plays a lot into the two narratives and the conflict we have today.”

The two guides heard each other out politely, with the occasional quip or raised eyebrow. Two dozen tourists, mainly foreigners living in the city, peppered them with questions.

The company, MEJDI Tours, says its “Dual Narrative” tour was “created in partnership by Israelis, Palestinians, Arabs, and Jews”. The weekly tours have been underway since last October.

Israel considers all of Jerusalem its capital. The Old City and holy sites lie in the mainly Arab eastern half, captured by Israel in a 1967 war and annexed in a move not recognized internationally. Palestinians say the eastern half is occupied land and must become the capital of a future Palestinian state.

At the heart of Old City, the tour came to the hill known to Jews as the Temple Mount and to Muslims as the Noble Sanctuary.

“Where the Dome of the Rock today is standing, the Prophet Muhammad ascended to Heaven to talk to God,” Awad told the tour party, describing what Muslims consider the holiest spot on earth outside of the two Arabian cities Muhammad called home.

“That’s a very central event, somehow similar to the story of Moses talking to God from Mount Sinai.”

For Jews, it is the site of the biblical temple, destroyed by Babylonian conquerors, rebuilt and razed again under the Romans. The Western Wall, a restraint for the foundations built by Herod the Great 2000 years ago, is a sacred place of prayer.

“All the way down deep underground, underneath the golden dome, 5779 years ago, God created the world. 4,000 years ago we believe Abraham came to bind Isaac on that exact spot,” Zilberman Soloway said.

Dave Yedid, 26, a Jewish seminary student from Long Island, New York who came on the tour, said: “exactly what differs in the sort of Jewish Zionist narrative versus the Palestinian narrative is something I’ll take home with me.”

“I wanted to see those two side by side.”