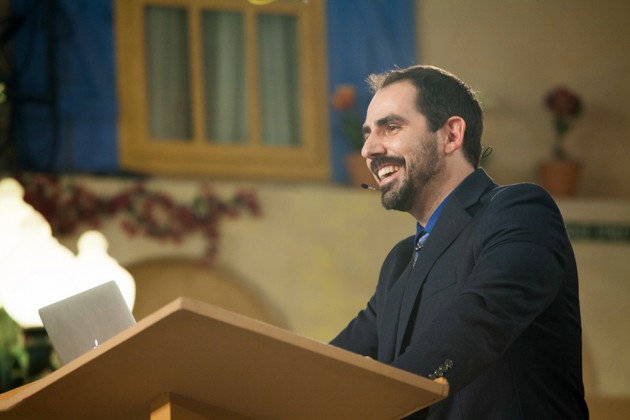 2 Peter 3:3-4 It is most important for you to understand what will happen in the last days. People will laugh at you. They will live doing the evil things they want to do. They will say, “Jesus promised to come again. Where is he? Our fathers have died, but the world continues the way it has been since it was made.”

Tuesday night, Joel Richardson was welcomed back to the stage as our evening service speaker.  The crowd was riveted and eager to hear his teaching.  Joel began by reminding many of the people about the huge anticipation during the 1980’s regarding the rapture and it’s coming in 1988.  Still having the booklet with him – ”88 reasons why the Rapture will Happen in 1988” – Joel wanted to share with us what occured when that rapture did not occur.  “Many churches simply stopped their message of Christ’s return and many believers lost their faith from their disappointment and disillusion.”

Joel acknowledged that there are indeed biblical prophecies being revealed during these times but we cannot mistake any chastisement from God towards the U.S. as being proof that we are in the 7 years of tribulation.

In 2nd Peter he writes, “Mockers will come with their mocking.’

The closer we get to the actual day the greater the mocking will become.  It is up to the church to be responsible not to give legitimacy to their mocking.  If we, as believers, do not hold steady we could see a repeat of the aftermath of 1988. I am concerned we are setting ourselves up so at the very moment the Lord is standing at the door, too many will have turned away. Many will call his return a distraction.”

“I am not saying things are not going to happen. We could see invasion, economic or natural disaster, or even an EMP blast attack. We do need to be prepared for what is coming! But we cannot make those signs point to an ending that has not yet begun.  This is in God’s timing, it is HIS business. We are seeing signs of His coming but we must listen to what God says in His Word, on the events leading up to Jesus coming!”

Joel carefully went through the book of Daniel, Revelation, Matthew and John revealing the events that must happen before our Lord’s return.  Focused primarily on the antichrist and how he will come to be, Joel noted that at this time the antichrist has not been revealed nor has he begun any of the prophecies that are spoken of in God’s Word.

Joel also spoke on how God’s teachers and prophets’ inspired words are being twisted to the world by the internet and media.  “Teachers can say one thing and within days, or even minutes, their words will have been twisted into something else. Pay attention to what you are reading on potential issues.” By staying close to God you can discern what is truth.  Read the Bible. KNOW HIS WORD!  And you will be able to see the events unfolding according to scripture.

“We are all waiting for the time of the Great Tribulation” Joel stated as he posed questions of what we would do when events become much worse than the holocaust on Jerusalem.  “Where will we stand?  How are we preparing besides for our families and communities?  Are we preparing to be a place of refuge?”

Joel Richardson closed his message by reminding us all that we must spend as much time getting ready for our time in heaven as we are for our time on earth; preparing our own hearts, reaching out to others and spreading God’s Word.

One thought on ““We are All Waiting!” Joel Richardson and Biblical Teaching on the End of Days”