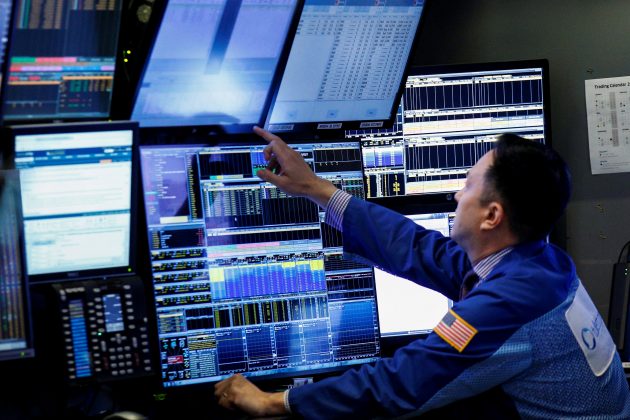 A trader works inside a stall on the floor of the New York Stock Exchange (NYSE) in New York, U.S., October 3, 2017. REUTERS/Brendan McDermid

By Ankur Banerjee and Gayathree Ganesan

However, the market traded in a narrow range as investors awaited upcoming quarterly earnings from big names to help justify the lofty valuations.

Third-quarter earnings for S&P 500 companies are expected to increase 5.5 percent from a year earlier, according to Thomson Reuters research, after rising a better-than-expected 12.3 percent in the second quarter.

“Tech has been in leadership for the first nine months of this year,” said Art Hogan, chief market strategist at Wunderlich Securities in New York.

The sector is stabilizing as seasonal rotation ends and investors are looking at the stocks as opportunities now, he said.

The markets have been scaling new highs and on Monday found support from factory data that pointed to underlying strength in the U.S. economy.

The encouraging data helped world shares touch their latest record highs on Tuesday, while lifting the dollar to its loftiest in 1-1/2 months.

“The first two days of October seem to be a continuation of what happened in the last two weeks of September … we’re gradually grinding higher in the month of October,” said Hogan.

(Reporting by Ankur Banerjee in Bengaluru; Editing by Sriraj Kalluvila)