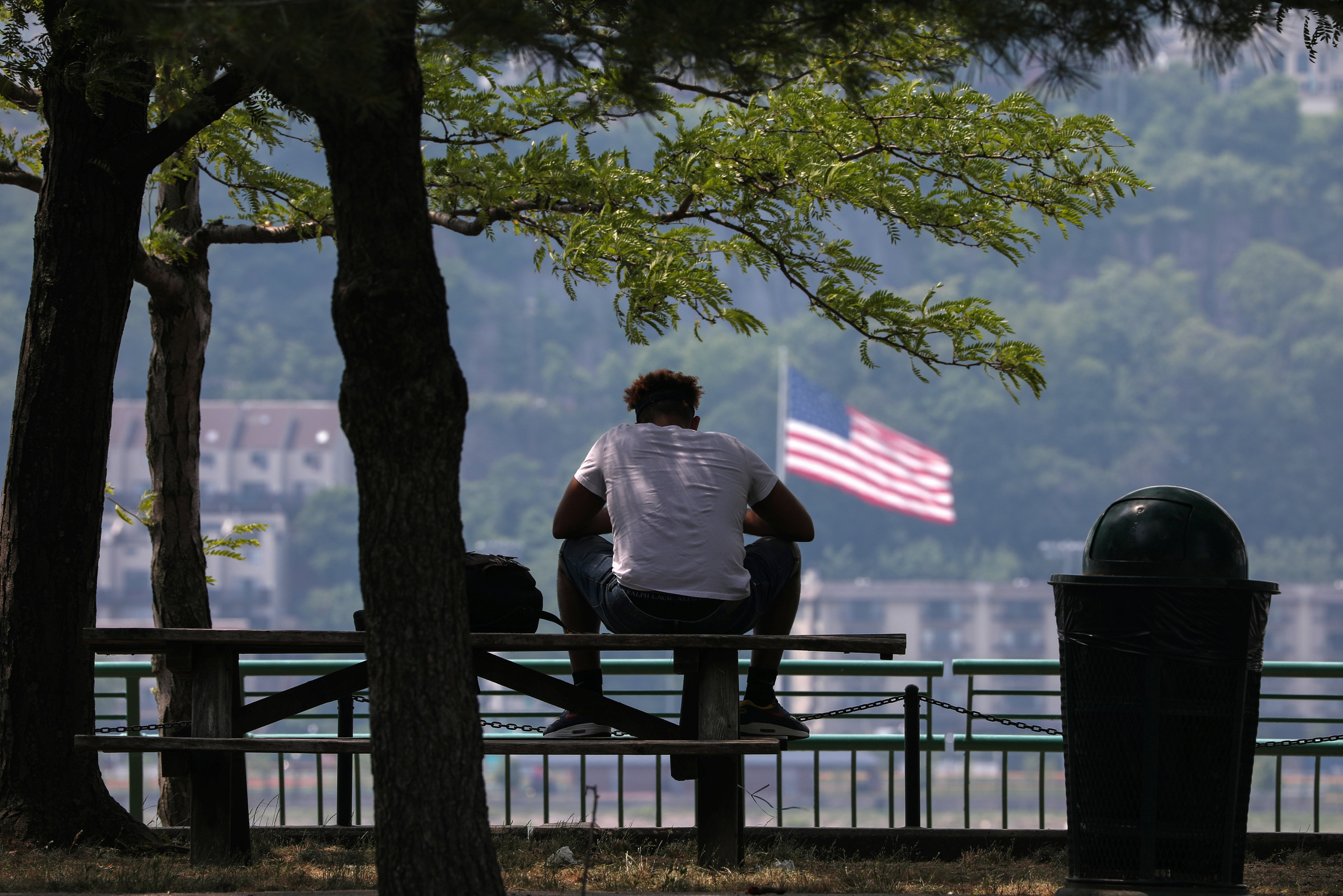 CHICAGO (Reuters) – Chicago and St. Louis sweltered on Monday at the center of a heat wave that stretched across the U.S. Midwest and Northeast, although relief could come as soon as Monday evening in some areas.

After a hot weekend, the temperature reached 91 Fahrenheit (33 Celsius) in Chicago and 92F in St. Louis by early afternoon, the National Weather Service said, with both cities opening air-conditioned cooling centers to the public.

The heat index, which factors in humidity, hit 100F in St. Louis. Similar heat in Detroit compelled the city to announce it would close many public schools three hours early on Monday, the Detroit News reported.

Cleveland, Ohio, broke a record on Sunday for its hottest June 17 on record with the mercury reaching 94F, Oravec said.

A Chicago native, Sharonda Williams, 31, carried a frozen drink as she returned to work at an outdoor kiosk for a bus tour company on Monday afternoon.

“It’s hot, but you really can’t complain,” she said. “When it’s freezing cold, you’re wishing for the hot weather. But now that we got it, you want the freezing cold. You can’t win.”

The National Weather Service forecasts a rapid cool-down on Monday evening in Chicago as cooler weather blew in off Lake Michigan, with the possibility of scattered thunderstorms.

The Great Lakes and Northeast regions, where many local governments issued warnings of poor air quality, will also cool down as the week goes by with the arrival of thunderstorms as a cold front presses south, the weather service said.

NEW YORK (Reuters) – The Dow and S&P 500 eked out record closing highs on Thursday, turning higher at the last minute after a Politico report that Federal Reserve Governor Jerome Powell is the leading candidate for the nominee for Fed chair.

Investors have been anxious to hear who President Donald Trump will pick as the nominee. A decision like Powell would likely be a continuation of the current stock market-friendly monetary policy that has helped fuel the market’s more than eight-year bull run.

Stocks had been recovering from early losses for much of the afternoon but the S&P 500 and Dow were still a tad lower just before the Powell report.

“Clearly at the end it had everything to do with the speculation about Jerome Powell,” said Mark Luschini, chief investment strategist at Janney Montgomery Scott in Philadelphia. “I can’t observe any other reason for why we ended up.”

“He’s viewed to be sort of an extension of (current Fed Chair) Janet Yellen by way of being a policy dove … and, with the market loving more of the same with regard to uber-accommodative monetary policy, as more welcome than the alternative,” he said.

The White House on Wednesday said Trump will announce his decision on the matter in the “coming days.”

Tech shares were among the day’s biggest drags, led by Apple <AAPL.O>, which fell 2.4 percent in its biggest daily percentage decline since Aug. 10 as doubts about its double 2017 iPhone release strategy weighed on investors.

Stocks have posted a string of record highs in recent weeks, and the Dow closed above 23,000 for the first time on Wednesday.

The day also marked the 30th anniversary of the 1987 Black Monday stock market crash. Most traders see a repeat of the crash as unlikely because of modern trading technology and other changes.

Investors also took profits in the broader tech sector, which has had a strong run so far this year, gaining about 30 percent and helping drive the market’s recent record run. The tech index <.SPLRCT> was down 0.4 percent on the day.

Weighing on the market early as well was some disappointing news on the earnings front.

Shares of eBay <EBAY.O> were down 1.8 percent a day after it reported results.

Advancing issues outnumbered declining ones on the NYSE by a 1.04-to-1 ratio; on Nasdaq, a 1.33-to-1 ratio favored decliners.

About 5.8 billion shares changed hands on U.S. exchanges. That compares with the 5.9 billion daily average for the past 20 trading days, according to Thomson Reuters data.

By Ankur Banerjee and Gayathree Ganesan

However, the market traded in a narrow range as investors awaited upcoming quarterly earnings from big names to help justify the lofty valuations.

Third-quarter earnings for S&P 500 companies are expected to increase 5.5 percent from a year earlier, according to Thomson Reuters research, after rising a better-than-expected 12.3 percent in the second quarter.

“Tech has been in leadership for the first nine months of this year,” said Art Hogan, chief market strategist at Wunderlich Securities in New York.

The sector is stabilizing as seasonal rotation ends and investors are looking at the stocks as opportunities now, he said.

The markets have been scaling new highs and on Monday found support from factory data that pointed to underlying strength in the U.S. economy.

The encouraging data helped world shares touch their latest record highs on Tuesday, while lifting the dollar to its loftiest in 1-1/2 months.

“The first two days of October seem to be a continuation of what happened in the last two weeks of September … we’re gradually grinding higher in the month of October,” said Hogan.

(Reporting by Ankur Banerjee in Bengaluru; Editing by Sriraj Kalluvila)

The Labor Department reported Friday that a record number of Americans are out of the workforce.

It’s the first time that the total number of Americans out of the workforce topped 94 million.

The report also showed that a record number of women were out of the workforce.  56,253,000 women were neither employed or looked for employment in the month of August, up 44,000 from July.  The labor force participation rate for women was at 56.7 percent.

The report sent the stock markets into a tumble to wrap up the week.  All three of the major stock indexes were down with the Dow Jones Industrial Average down over 200 points.  Oil markets were down as well following the report.

The jobs report said that 173,000 jobs were added during the month, much lower than analyst expectations.  At least one analyst told CNN the number would likely stop the Federal Reserve from raising a key interest rate as widely believed will happen at their September meetings.

“You can’t hike on a 173,000 number,” says Phil Orlando, an economist at Federated Investors. “The Fed has to think long and hard about pushing this thing out to December.”